A Day of Normalcy

When you get down to it, normalcy feels pretty darned good.

We enjoyed what has become our traditional Thanksgiving celebration at my brother's house in south Florida.  There and back combine into five hours of driving, but it's mostly the Florida Turnpike and I-95 so it's easier than driving in stop and go traffic.  This was the smallest gathering I can remember; there were just eight of us.  We spent from about 12:30 till about 7:30 PM with my extended family.  It's just good to spend time with family.

Today was our Thanksgiving here with just us.  I smoked a turkey using a method I found on Serious Eats; a combination of spatchcocking the turkey together with a dry brine and then smoking in my Weber kettle grill.  It gives such a nice pink smoke ring in the meat that you just don't get with the electric smokers.  I've done this basic recipe a few times and it does produce a good turkey.  I have fooled around with what I do a bit but I never know if the main difference is what I've done or how the turkeys are being raised. 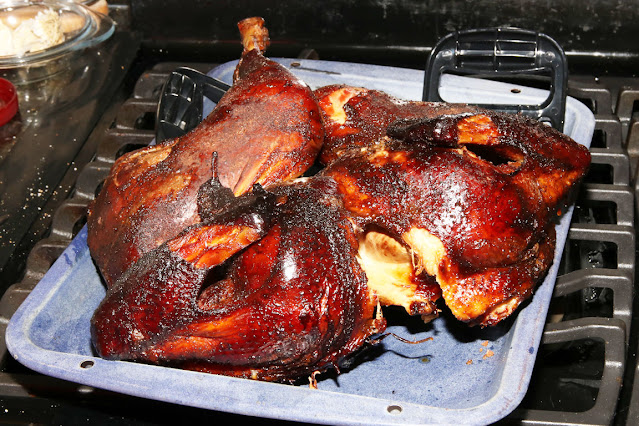 Since it's Black Friday (for another few hours), I feel like I do at least one post about the absurdity of this new national "holiday" every year.  I'm a bit on the curmudgeonly side on this whole thing.

I don't know about you, but I'm sure I started seeing black Friday ads in July.  For sure, I must have been getting 50 to 75 emails a day with black Friday in the subject for the last month.  When we have a Black Friday sale in every month, what's so special about it anymore?  In the usual sense of a special day that kicks off the Christmas shopping season.  Add to that the fear of product shortages causing people to start doing their Christmas shopping early, and I don't even know if Black Friday is today or if it was some weeks ago.

Once there started to be a perception that good deals came on Black Friday, it was only a matter of time until it became just another way of saying “BIG SALE!”  But shoppers like to think they're getting big deals, and there are stores that put one or two items on a massive discount to get some people to line up the night before.  Maybe they can get some buzz on the news.

It always pays to know what going prices are.  I've heard that generally speaking, the best time for deals isn't today, it's closer to Christmas; and especially the last couple of days before Christmas.  You could get better prices than this week, but it's a gamble.  You're betting that the stores will be stuck with something you want and would rather discount it than not sell it.  If they sell out first you lose.  If they don't sell out but still won't or can't cut the price, again you lose.  That said, it has worked out for me in the past.  It's sort of like calling a bluff in poker.

Retail is a rough way to make a living. I'm sure you've heard how airline reservation systems base the seat price on the apparent interest in a flight.  If you go back and check on the price of that seat every week, the system says there must be more demand for that flight and raises the price.  What if stores could measure real time demand and adjust the price.  Say you're looking for a new tool or other gadget; what if they see someone checking the web site regularly and interpret that as several people interested in that item and raised its price?  Would you be upset or offended?  What if they dropped the price to see at what level you can't resist pushing the Glistening, Candy-like, "BUY IT" button?  I don't have any hard evidence that anyone does that, but it seems trivial for an online store to track interest in something.  The biggest risk is scaring away customers.