At the end of last year, SpaceX was talking about 48 launches this year.

Musk also says that SpaceX is “doing a broad review of launch site, propulsion, structures, avionics, range, & regulatory constraints” to determine if an apparent goal of “48 launches” in 2021 is feasible.

“We will need to make a lot of improvements to have a chance of completing 48 launches next year!”  Elon Musk, October 3, 2020.

As the year progressed, it became evident the goal of roughly one launch every eight days wasn't going to happen (probably the most bizarre supply chain story (or rumor) I heard was that there's a shortage of liquid oxygen).  Notably they went from producing more Starlink satellites than they knew what to do with to redesigning them for laser based communications between satellites on orbit.  As a result there were only 20 launches in the first six months of the year, but only three in the entire third quarter of 2021.  The new Starlink "version 1.5" satellites are sufficiently bigger that the recent missions carrying them have only put 53 in orbit at a time instead of the 60 they've been lifting on one flight.

In an attempt to get back to the originally desired cadences, there's a year end push going on.  The first of these launches will be No Earlier Than (NET) this Wednesday evening, December 1st at 6:20 PM EST.  This launch will break the company’s record for their annual number of launches.  The way Teslarati author Eric Ralph describes the mission, though, is kinda confusing.

Got that?  Yeah, me neither.

The launch calendar I watch the most doesn't have that level of detail.  After Wednesday's launch they don't list another Falcon 9 until NET December 9.  The calendar fills out like this:

If everything goes according to these goals, considering that Wednesday's launch will set a new SpaceX record for launches in year, this will have been a banner year for the Falcon 9 and SpaceX even though by the numbers Eric Ralph presented, this adds up to 28 launches this year and not 48.

To quote myself from back in October of '20, 48 launches a year is obviously four short of one per week, and I don't know of any company, any government, or any entity launching orbital class vehicles that can do that.  It's ambitious, but the company is nothing if not ambitious, as seen both here and over in Texas. 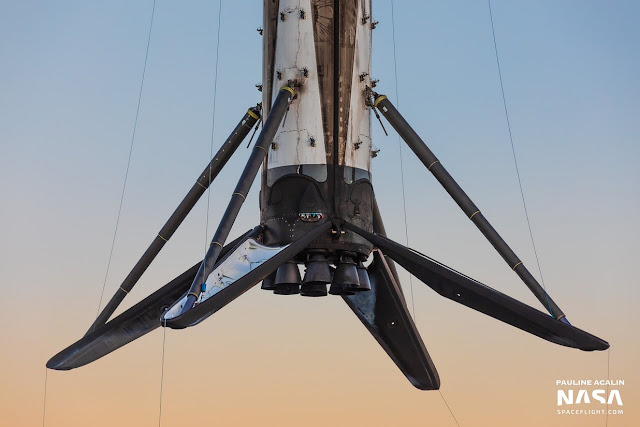 This is booster 1063 after it's third flight and return to the Port of Long Beach aboard Of Course I Still Love you.  This is booster that launched the DART mission last week. Photo (as it says) by Pauline Acalin.