In the overnight hours last night/this morning, SpaceX successfully launched NASA's Dual Asteroid Redirection Test (DART) spacecraft on its trajectory out of the Earth-Moon system into a solar orbit and headed toward the dual asteroid system.  DART is the world’s first planetary defense test mission.  Right on time at 0621 UTC (10:21 PST or 1:21 AM EST on the 24th over here), Falcon 9 B1063 lifted off from Vandenberg Space Force Base's SLC-4E on its third mission, reaching orbit about eight minutes later.

A few seconds after that, B1063 successfully landed on drone recovery ship Of Course I Still Love You.  DART was the first interplanetary NASA mission launched on a flight-proven commercial rocket and the Falcon 9 vehicle’s first interplanetary launch.  Falcon Heavy launched Elon Musk's Tesla to Mars, and while the two strap on boosters and the core stage are essentially Falcon 9s, those were not considered to have been the same as this one.  Whatever they like. 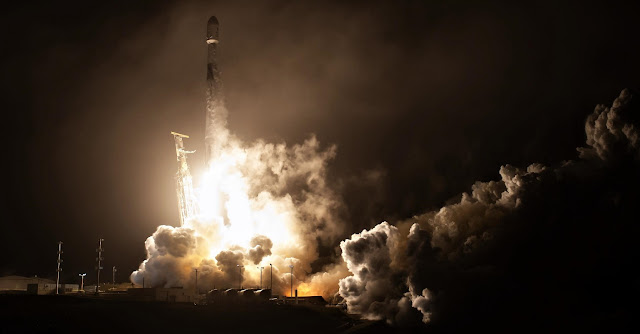 Around 28 minutes after liftoff, Falcon 9’s orbital second stage fired up for the second and final time. In just 53 seconds, Falcon 9’s upper stage accelerated from a stable velocity (relative to Earth’s surface) of 7.5 kilometers per second (4.7 mi/s) to almost 11.1 km/s (6.9 mi/s), sending DART (and itself) from low Earth orbit (LEO) to an Earth escape trajectory that will ultimately leave them in orbit around the sun.

SpaceX provided their usual video coverage, but it started a few minutes longer before liftoff to include a few minutes of presentations on DART.

DART (NASA's mission page) is the first time people have attempted to change the orbit of an asteroid.  The key is in the name Dual Asteroid Redirection Test: DART is headed for a dual asteroid, and is intended to smack into the smaller asteroid (Dimorphos) orbiting a larger one (Didymos) under power.

“If DART succeeds, NASA anticipates it will be able to observe a slight 1.5% change in Dimorphos’ orbital period (how long it takes to orbit Didymos) with Earth-based telescopes. Perhaps one day – building upon DART, follow-up reconnaissance mission HERA, and other asteroid missions like Hayabusa2 and OSIRIS-REx – NASA and other space agencies will team up to develop a fleet of planetary defense spacecraft that can intentionally redirect asteroids that threaten Earth, preventing catastrophic impacts like the one that likely wiped out 75% of species and virtually all nonavian dinosaurs around 66 million years ago.”

Basically, it's the movie Armageddon turning into reality, except for the mission being unmanned, so no Bruce Willis equivalent and no live video as it's going on.  Well, it's a test of the concept; Dimorphos and Didymos are no threat to Earth.

The Dimorphos/Didymos system is in solar orbit relatively close to Earth, and the mission is going to complete between September 26 and October 1, 2022; under one year from launch.

Given that CEO Elon Musk’s entire motivation for founding the company and pursuing spaceflight was to help make humanity multiplanetary and protect against mass-extinction events like those that befell the dinosaurs, it’s only fitting that SpaceX ultimately won NASA’s DART launch competition and sent the DART spacecraft on its way to Dimorphos as part of the first true planetary defense test in history.

As is usually the case, I'll be taking off tomorrow for our annual family gathering in South Florida with my brother and his extended family.  Friday we'll be back, and I'll be smoking a turkey for us. That ordinarily doesn't affect my ability to look up something interesting.

In the meantime, a happy and healthy Thanksgiving to you and yours!