Congratulations! You Are Buying Part of Greece!

If you're an American citizen, congratulations.  As the principal funding nation of the International Monetary Fund, we are paying roughly 17% of the 1 trillion Euro bailout package for Greece.  In return, we get some Greek paper.  I think they use it for currency.

And you thought it was bad to bail out AIG!  That's OK - AIG is using that bailout money we paid them to sell CDOs on Greek debt - betting Greece will collapse.  So when they do collapse, AIG will make money from it!  The market has pretty much decided this isn't going to work and started betting the Euro will collapse.  It's also a factor in the run up of gold prices, currently about $1230/oz. 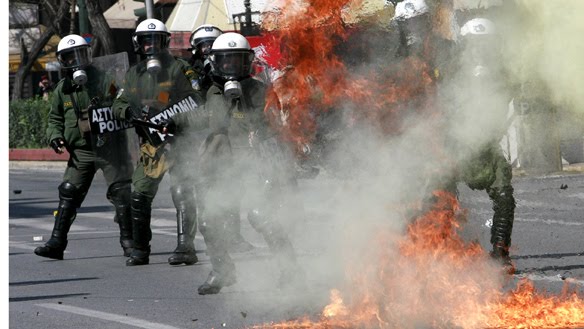 Last I heard, AIG wasn't throwing Molotov cocktails at the police, unlike the Greek union protesters.

This is a funny crisis because in some ways, it is complex, but looked at from another way it is incredibly simple.  Yes, there's a large number of things involved, but the root cause really comes down to one simple problem: too much spending, financed by too much borrowing.  So to fix this, the IMF is going to loan them more money.

Say what? They're going to fix a society that borrows too much money by loaning them more?  Isn't that like fixing an alcoholic by making them a nice, stiff drink?

Oh, it's more than that, they'll say.  They're going to make the Greeks raise taxes and not retire quite as young.  The numbers I can find are a bit conflicted, but everyone seems to agree that the Greeks retire several years ahead of the Germans, say, who will be paying to keep Greece afloat.  That's only good and fair, isn't it, if you're a German citizen, to work longer so that you can pay for someone else's retirement? I guess we Americans get the privilege of working longer to pay for someone else's retirement, too.  When German citizens objected to working longer so that their Greek counterparts could retire younger than they do, the Greeks shot back that the Germans had not paid them damages for WWII - so there!

It's really pretty obvious that people only have so much money.  Only the governments can print new money whenever they feel like it.  Every penny people spend on taxes can not go into buying other goods and services, causing an economic slowdown.  That will reduce the tax revenue as the number of people laid off and not paying taxes grows.  So they can't raise taxes too much or they'll kill tax income.  The only substantial change will be the workers who are expecting to retire will have to work longer.

The risk here is that Greece pulls out of the EU, or the Germans do, or the European Union dissolves.  See, Greece is just first, why should Germany pay for all of them?  The German public is already rebelling against Angela Merkel.  It's not like everyone has a strong economy except Greece.

Will this work?  Will the world stabilize?  I'm not betting my money on it.

Perfer et obdura; dolor hic tibi proderit olim - Be patient and tough; some day this pain will be useful to you. (Ovid)
Posted by SiGraybeard at 9:37 PM