What Do You Do When It Goes Over The Line?? 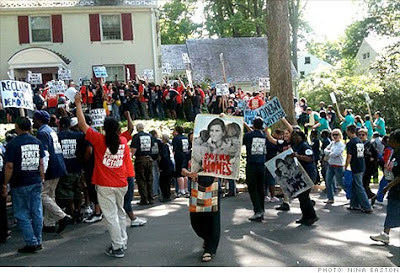 Many people have written about the organized thuggery carried out by SEIU goons last week, when they bussed in protesters to a banker's house.  There are reports that the thugs were escorted by police, or at a minimum, the police were not willing to do anything.

Nina Easton's article on CNN's website has a lot of the relevant facts.  The banker whose home was attacked had been at his child's baseball game.  Another, older, child was at home terrified and had locked himself in the bathroom.  Picture yourself in this situation; your child is home afraid and needs to be protected.  You're with a child that you just can't leave to fend for himself either, what do you do?  You don't have backup.  You aren't  a professional security guy or special forces operator.  You're a dad with two scared kids, and you're probably pretty scared yourself.

Dad parked some distance away, left the younger kid in the car and managed to force his way into the house.  Got older kid and escaped.  All was well.  Being rent-a-mob union protesters, they're probably just "paid by the hour" and just going through the motions anyway.  Too lazy to get a real job. All's swell that ends swell.

But what if?  What if it wasn't just rent-a-mob protesters?  After all, these are the same sorts of people who have blown up buildings, blown up radio towers, car dealers, and done real violence.

I would have been uncomfortable leaving the little kid alone.  First off, I don't know that a thug won't attack him.  After all, they bit the finger tip off a guy at a town hall, hospitalized Ken Gladney, heck - they even intimidate other union groups and socialists - why should I assume they won't hurt my kid?  On a darker note, how do I know I'm going to survive to get back to the kid and get out of Dodge?

I would probably take the young son with me, and do my best to sneak into my house from another side.  Back door?  Without knowing the layout of the property it's hard to say, but this guy went in through the front door.  Then I would make sure the kids were safe and prepare to repel invaders.  If no one breaks in a door or window, fine.  If they do, "the shotgun sings the song", as Pete Townsend wrote in "Won't Get Fooled Again".

Look this is way over the line.  The fact that SEIU thinks this is just a dandy way to do business shows you what scumbag thugs they are.  If these keeps up, someone is going to get a load of 00 buckshot in the face.  Take my word: that will completely ruin their day.  As a people, we need to make it clear this is not an acceptable way to protest. Families are off limits.  No exceptions.

Maybe the reason they do this in Maryland is that they're less likely to come across someone with self-defense capability.

Perhaps more interesting than why they do it in Maryland is why they protest the Bank of America at all?  Could it be they are deeply in debt to the bank, to the tune of over $156 Million at last report.  As Ms. Easton says,


A lifelong Democrat, Baer worked for the Clinton Treasury Department, and his wife, Shirley Sagawa, author of the book The American Way to Change and a former adviser to Hillary Clinton, is a prominent national service advocate.
In the 1990s, the Baers' former bosses, Bill and Hillary Clinton, denounced the "politics of personal destruction." Today politicians and their voters of all stripes grieve the ugly bitterness that permeates our policy debates. Now, with populist rage providing a useful cover, it appears we've crossed into a new era: The politics of personal intimidation.