Let me start out by saying that I don't own an electric car.  I've been pretty hostile to the Volt, but to be completely honest, if I had the nearly $90,000 it takes to buy a Tesla Model S I probably would.  Electric motors tend to have maximum torque down to stall (zero) speed (some have max torque only at stall), and while a Model S doesn't look the part, it delivers more torque to pull a boat up the ramp than my '09 V-6 Explorer.  Yo, Elon!  Why don't you guys make an electric SUV? Oh, of course!  The demographic that would spend that much on a car to feel good about themselves wouldn't want their friends or complete strangers in traffic to think they were driving an eebil SUV.

You don't have to look too far to find references to the Tesla having a problem with catching fire.   Is it true?  It's difficult to determine how bad the problem really is, but estimates are that Tesla has sold around 20,000 of these cars and perhaps five have caught fire (these three don't include the second link above).  That's one in around 4000; compare that to gasoline cars where approximately one in 1350 conventional cars burns (derived in this pdf).  One source I ran into said 17 gasoline powered cars burn every hour.  Balance those little facts with this: Teslas are new - the company just hasn't been in production very long.  The 20,000 can't be more than a couple of years old; are the conventional cars that are burning two years old, or older cars, possibly with less than stellar maintenance. Whether or not you view the one in 4000 risk of fire as too great is your personal choice for the moment, but you might be interested to know that GM just recalled 370,000 of their GMC Sierra pickups for a software fix that had caused eight fires, or 1 in 46,250.

The Tesla design uses lithium ion batteries and they're mounted low to the ground in the car's frame.  Low-mounted batteries may be subject to impact damage from road debris, and at least one fire was attributed to road debris.  Lithium, as an alkali metal, is extremely reactive.  Crack the battery and expose lithium to oxygen from the air and you have an instant problem. Put in a little water and you have a fire. See a good chemistry text or even Wikipedia for details.  But the fact remains that gasoline stores far more energy in a tank: it's one of the reasons electric cars don't have the useful range of gasoline cars.

That said, like the writers at Design News, I believe Tesla will resolve these issues.


But if there is a change, it will be a tweak. It won’t be a huge fix. Nor will it be a sign that EV batteries are inherently unsafe. Remember, gasoline is far more energetic than lithium-ion chemistry, as is jet fuel. Yet every day, engineers successfully design safe cars that burn gasoline. They design safe planes that burn jet fuel. They design safe machines that burn coal, hydrogen, and even uranium. In all cases, they take a package of energy, figure out how to use it in a productive way, and then build in safeguards.

Take Boeing's 787 Dreamliner.  Last January, Boeing grounded their fleet of 787s after some lithium battery packs caught fire.  Unlike a Tesla, if your airplane catches fire, you can't pull off to the side of the sky and get out.  You need to put it on the ground in a very controlled way, and that complicates things. (Obligatory old aviation joke: commercial aviation has a perfect record - after nearly a century flying we've never left a single plane up there).  Boeing and their battery supplier redesigned the battery pack and got the fleet back in service in a couple of months.  The new design doesn't make the battery pack absolutely fire proof, but it's designed to prevent cell failure, and then prevent propagation of a fault, so that only one cell in battery pack would fail.  Indications are that the approach worked.

Last fall, an Ethiopian Airlines 787 caught fire on the ground at Heathrow Airport, burning a hole in the carbon fiber fuselage of the plane, just in front of the vertical stabilizer (tail) and the "scuttlebutt on the street" was that it was the 787 battery pack failing.  In fact, it was the batteries in an Emergency Locator Transmitter, a small box that transmits the aircraft's position to satellites in low earth orbit in case of a crash.  The ELT, an option to increase flight safety, took out the airplane and led to a worldwide check of that company's ELTs (thereby illustrating the first law of reliability engineering: adding parts never improves reliability). 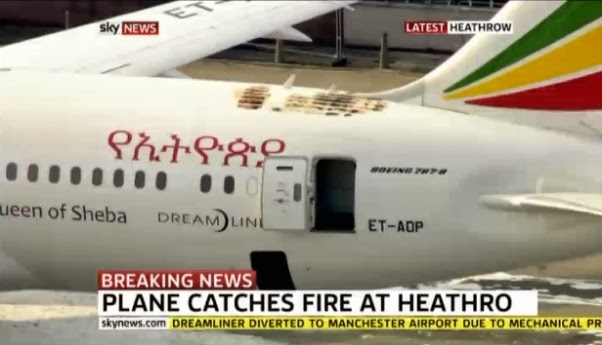 (source)
Bottom line: a battery is like a gas tank; it's an energy storage facility.  Storing energy anyplace automatically stores the risk that the energy gets released in an uncontrolled way.  Even relatively small batteries can produce stunning amounts of current when short circuited and the heat can ignite sensitive materials.   A NiMH AA battery, for example, can put out over 50 Amps for a little while, enough to weld light metals.  You don't want to short out something the size of a car starting battery, let alone the massive batteries in Tesla.