China Isn't Going to Recover for a Long Time

A few times in the last year, I mentioned Jim Rickards and his book "The Death of Money" (book link).  In one of the more pucker-inducing section of the book, Jim devotes a full chapter to the problems lurking just under the surface in China.  China has corruption that makes our government look like a brownie girl scout troop.

One of the ways this corruption is evident is in systemic malinvestment.  It works like this:  China doesn't really have a free market system; it has a state run economy like any other socialist state.  There is some freedom around the edges, but the monsters are the so called "state owned enterprises", typically run by local or provincial "big wigs", almost the equivalent of war lords.  Think of these SOEs as engines of corruption, shoveling money from the government to cronies who do whatever they want with it (did I say it was like our system, only worse?)   China has "ghost cities" that have never been occupied, bridges to nowhere, bridges and other projects that are abandoned after an aborted start and more.

Case in point is the city of Caofeidian, the "world's first fully realized eco-city", in a Guardian article from July of '14.  Roughly 120 miles southeast of Beijing, Caofeidian was built on land reclaimed from the sea by dredging sea bottom and piling it up (the term "dredge and fill" is an obscenity in South Florida, BTW).


‘As precious as gold ...’ That was how then-president Hu Jintao described Caofeidian during his visit in 2006. It was pledged to be ‘the world’s first fully realised eco-city’ – yet 10 years and almost $100bn later, only a few thousand inhabitants have moved to this land reclaimed from the sea ...

One million residents were once supposed to live there. It is a ghost town today, sporting only a few thousand inhabitants. Practically no-one has ever stayed in the city, and the buildings are already deteriorating. In fact, many of the buildings have been left half-finished, as credit eventually ran out.

The first city to get a lot of press as a ghost was Ordos, in Inner Mongolia.  Ordos was built as a copy of... well, Ordos, a Mongolian city that became wealthy as a center for coal production.   A BBC article from 2012 begins:


A huge statue of the mighty warrior Genghis Khan presides over Genghis Khan Plaza in Ordos New Town. The square is vast, fading into the snowy mist on a recent Sunday morning.

Genghis Khan Plaza is flanked by huge and imposing buildings.

Two giant horses from the steppes rise on their hind legs in the centre of the Plaza, statues which dwarf the great Khan himself.

Only one element is missing from this vast ensemble - people.

There are only two or three of us in this immense townscape. Because this is Ordos, a place that has been called the largest ghost town in China.

But it's not just cities, it's all sorts of infrastructure.  Consider the Qingdao Haiwan Bridge, shown here in white in the middle of the water. 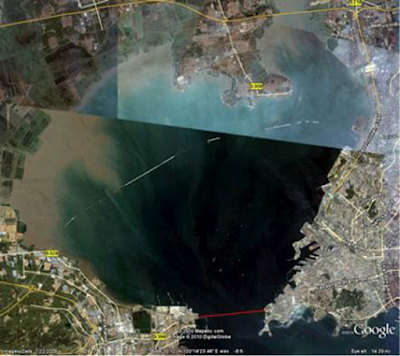 This recently completed bridge (the white line across the middle of the bay in the image above) holds the world record for the longest bridge over water.

Built at a cost of 56 billion yuan ($8.7 billion), the bridge crosses Jiaozhou Bay and connects the main urban area of Qingdao city with the Huangdao District.

The bridge saves approximately 20 minutes drive time to go from one industrial side to other.  Is 20 minutes times the number of commuters really worth $8.7 billion?  How much traffic does this represent?  Consider, instead, building a bridge where the red line is at the mouth of that bay.  It wouldn't be able to claim the title of "longest bridge over water in the world", but it would have cut drive time between the population centers as well.

There's bad investment all over China: bridges, cities and more.   Estimates run into the trillions of dollars.


That’s why we’ve seen China’s gross domestic product (GDP) decrease every consecutive year since 2007. And it’s now growing at its slowest pace in 25 years. China’s GDP is expected to contract even further next year.

The billions of dollars in lost export revenue are now no longer available to service bad debts.

The lost revenue was the cash flow that kept the show going. Without it, those who have partaken in this grand scheme will have their legs swept out from under them.

He also cautions that we're not going to see China default or go bankrupt, but it is going to take years to go through this bad debt.  The days of the (so-called) 7% per year growth in China are over.  In my opinion, they're going to look at years of zero to negative growth.  That will ripple around the world, and will affect the US economy, too.  He presents a list of Exchange Traded Funds that center on China that should be avoided.  If you accept his analysis (RTWT). 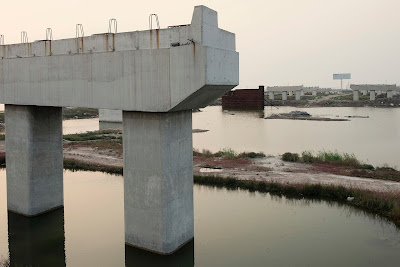 Bridge pylons from Caofeidian.  A six-lane road span bridge was abandoned after 10 support pylons had been erected.