The Saudi Oil Plan Is On the Verge of Breaking Down

Back in October, I posted about an article I had read saying the Saudi oil ministry had a plan to bankrupt the US oil industry.  Essentially, Saudi Arabia is the only oil supplier that can make a good profit pumping oil at $30/bbl, but that would mortally wound the Kingdom's finances, which prefers closer to $80/bbl.  Believing that $70/bbl was the price of American fracked oil, they targeted $60 a barrel expecting the price would move around that number but feeling comfortable they could keep the price of oil under $70 until they shut down American production, when they'd raise prices again.

Oil has been under $40 since early December, and we've seen ominous stories of supertanker traffic jams at sea as the processing facilities in Houston and elsewhere around the globe just can't handle the oversupply.  Clearly, there's too much oil in the system, which cries out for production to be shut down.  The US industry has been hit hard, just as Saudi Arabia planned, with some industry investors saying that half the US energy industry will be bankrupt within six months.

Today, in a trader's newsletter, I read that this pressure from low prices is causing troubles in OPEC and the Saudi plan is on the verge of breaking down.


In fact, several OPEC nations are now in open opposition to the Saudi policy, with Venezuela, Nigeria, Libya, Iran, and Ecuador leading the charge to make the production cuts that would ease the supply glut and send oil prices higher.

Economically, OPEC has painted itself into a corner, and the only way out now is through higher prices. Even the Saudis understand that.

That’s why Riyadh is now signaling to the likes of Russia and even the U.S. that they would support a joint move with non-OPEC producers to “stabilize” the international market.

To accompany these supply side pressures to cut production and raise prices, the demand side is forecast to grow, by an average of more than 1 million barrels a day annually, led by Asia.  That should cut the over supply as well.

Finally, consider the geopolitical possibilities.  I'm sure you saw that Saudi Arabia executed 47 "terrorists",including a Shiite (Iranian) cleric named Nimr al-Nimr, and Iranian protesters responded by raiding the Saudi embassy in Tehran.  This led Saudi Arabia to break diplomatic ties with Iran.  Officially, Iran condemned the attacks on the Saudi embassy, but it's hard to take that seriously.  The two countries are already essentially in a proxy war, fighting now in Yemen.  Could it spread to direct conflict between Saudi Arabia and Iran?  A wider proxy war?

The combination of all of these things going on lead me to side with newsletter author Kent Moors.  I don't think it's reasonable to try to predict exact prices, but we might well have seen the lowest oil prices we're going to see, or we'll see them soon (already tonight, as Asian markets are open, oil is up moderately).  I expect oil to be up over the next six months, and up over that in the following six months.  We won't be at $100/bbl, but with today's price below $40, $60/bbl by the end of the year seems rather reasonable - it's only going back to prices from last summer - and $80/bbl doesn't seem that out of the question. 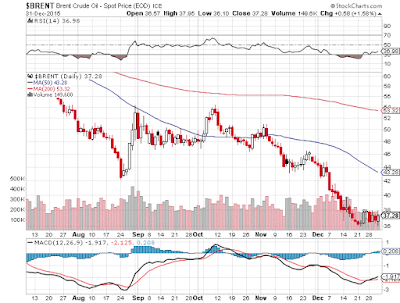