Monday's full Wet Dress Rehearsal of the B7/S24 Starship stack was apparently fully successful.  It leaves me not quite sure why they did the overpressure notice, NOTAM and MIB, but perhaps mandatorily excessive safety worries.  SpaceX put up a tweet noting the success, including some flyover footage (about 20 seconds). 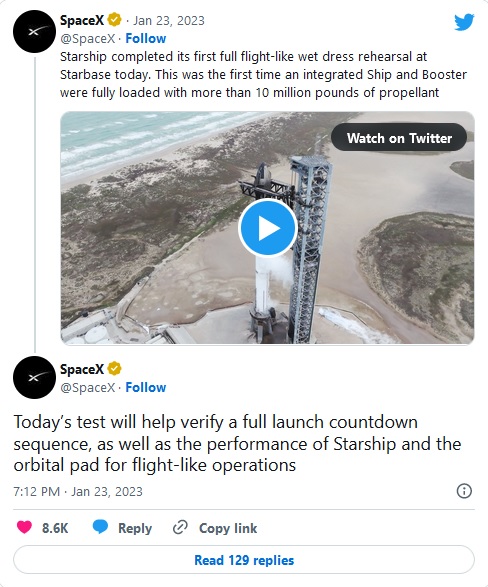 This is definitely an important step in their preparations to launch, but as of this evening, there are no road closures that might indicate a major test soon posted at the Cameron County website.  I interpret that to mean speculation is even less worthwhile than usual.  The only thing mentioned there is a "Temporary & Intermittent Road Delay of State Hwy 4; January 26, 2023 from 8:00 am to 10:00 am."  I've seen this when SpaceX might transport something from one end of the facility to the other.

The full stack is the tallest rocket in history, and when fully fueled it became the heaviest rocket ever built.  Starship is about 394 feet tall and 30 feet in diameter.  The Saturn V was about 30 feet shorter than Starship.

After hours of conditioning the Starbase, Texas orbital launch site’s giant tank farm, SpaceX opened the floodgates and loaded Ship 24 and Booster 7 with up to 4860 tons (~10.7M lbs) of cryogenic liquid oxygen and liquid methane propellant in about 90 minutes. Once fully loaded, the combined weight of the rocket and propellant likely exceeded 5000 tons (~11M lbs), making Starship the heaviest rocket in history. The next heaviest rockets ever built, Saturn V and N-1, weighed around 2800 tons (~6.2M lbs) fully loaded.

The company later confirmed that the test was a “full flight-like wet dress rehearsal,” as suspected, and noted that data gathered from it would “help verify a full launch countdown sequence, as well as the performance of Starship and the orbital pad for flight-like operations.” Parts of the test visible from unaffiliated webcasts like NASASpaceflight’s (10 minute highlight video) seemed to confirm as much. Shortly after Starship was fully loaded, for example, SpaceX activated the orbital launch mount’s fire extinguisher system, seemingly practicing the moments before the rocket would otherwise ignite its engines and take flight.

Note: the video linked in the source article (on Teslarati) was over eight hours long.  I replaced that link with the 10 minute highlight video.

In the last year, SpaceX has slowed their pace of Starship development down from the heady days of 2020/21.  Between August of '20 and May of '21, SpaceX carried out five launches and attempted landings of prototype Starships, eventually succeeding on the fifth attempt (and not having the landed ship blow up minutes later) - and I think if the fifth attempt hadn't worked, they would have tried until they had a successful mission.

On the fifth attempt, the Starship flew to around ~41,000 ft up, shut off its engines, flipped to horizontal for its controlled fall back to Earth, reignited its engines, flipped back to vertical, and landed in one piece.  Since then, for reasons I haven't seen discussed, they changed to a more cautious approach.  Whether that was due to nudging by the FAA, NASA or other Fed.gov pressure, or an internal realization along the lines of "Holy $%#*!!! This is over 16 million pounds of thrust!  It's the biggest rocket in history!  If this thing blows up in the worst possible way, we could lose lots of hardware and people," I have no way of knowing.

Finally, just because it's pretty.

The title picture at Teslarati. I'm going to say SpaceX photo by one of the drones they fly around the base during tests.

Oh, and for those keeping track, Rocket Lab's first launch from Wallops Island, Virginia this evening was successful, opening the possibility of more frequent launches from the USA. They mention expecting one launch per month from Wallops Island, in addition to their New Zealand home's launches.