The End of the Manned Space Program 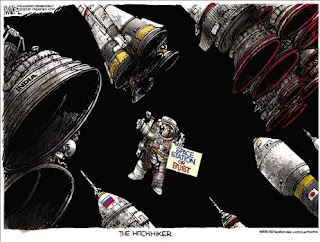 Another memory shared by everyone I've ever talked with about it is that we all can remember thinking back around the peak of the Apollo program that we would have a permanent moon base by the end of the 20th century and that we would have gone to Mars by now.  Instead, we've spent the last 30 years with the Space Shuttle and building the International Space Station.  Instead of a trip to a new and exciting place we've gone around the block for 30 years.  A Mars mission might be a dangerous trip, but we have still managed to kill plenty of our best and brightest driving around the block.  Later this year, the last flight of the Shuttle will occur, and the US will be without a manned launch capability for the first time since the early 1980s.  Over 6000 workers will be laid off.  It is hard not to view this as a massive loss of national prestige with China, India, Japan, the EU and others trying to develop or actively developing manned flight.  It is not hard to imagine Russia, under Vladimir Putin, shutting off our manned access to the ISS, and by default, taking it over.

The space program is personal for me.  I live near the KSC, and while I've never worked on the Cape, Mrs. Graybeard was there for 10 years including time on the Shuttle program.  Many of our closest friends have spent much of their careers launching Shuttles.  I have worked on unmanned and scientific research missions, at subcontractors, which is where most people agree the most bang per buck of new science comes from, and I worked at a subcontractor on systems for the ISS that never flew.  Beyond that, I'm also a product of the Sci-Fi of the 1950s and 60s, books by Heinlein, Asimov, and Clarke; books full of the promise of space travel, colonizing other planets, making our way into the galaxy.  I've followed every Star Trek series, seen every Star Trek and Star Wars movie, and pretty much every other space-travel oriented movie or TV series that was better than grade B.  Being without a manned space program bothers me.

The President has canceled the Constellation moon program that was currently under way, a program based largely on reuse of existing technology and approaches.  In its place, NASA is to open an office to work with private sector companies to develop manned access to space.  In principle, this is a good thing; the private sector is always more efficient than government programs.  As it is, the private sector runs all unmanned launches on the Cape, except for those that are military programs launched by the Air Force.  For those far from this area, there are two sides to what used to be called Cape Canaveral.  The Kennedy Space Center, which is the manned side, is located mostly on Merritt Island with its actual launch pads at the north end of Cape Canaveral.  Locals refer to the island and "cape side".  Unmanned launches are on the Cape Canaveral Air Force Station property, which is all cape side.  Deltas, Atlases, and some Titans are the bulk of unmanned launch vehicles, and are all commercial launches.

In principle it's a good idea; in practice it will be 10 years or more before we have a manned program, and it will be old tech, nothing new.  One thing that has become apparent to workers on the Cape is that experience matters, and all of these companies try to hire people experienced at launching rockets successfully.  The days of developing new launch vehicles and techniques in a few years are over. 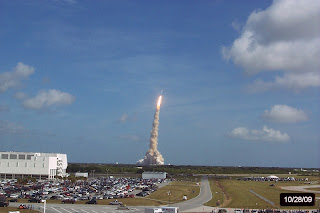 Like most of our national problems, this one isn't new.  The shuttles were intended for 20 year lifetimes and they are going on 30.  That means we have known as a nation that we had something that needed to be replaced but ignored the problem (we are pretty good at ignoring problems).  Presidents have given lukewarm mandates for programs beyond the shuttle, but nothing has really progressed.  The launch of the Ares-1 suborbital test flight, above, is the only actual flying hardware for a new manned program since the development of the shuttle.  And it's essentially a shuttle solid rocket booster with some fancy instrumentation on it.

Should NASA be involved in this sort of program?  Frankly, I don't know.  I believe a project like the ISS is not something NASA should be doing: it's too routine, too commercial.  The truth appears to be NASA needed a mission for its shuttle, and the ISS is a natural fit.  NASA should be leading edge; developing new technologies, like hypersonic transports, cheaper ways to orbit, things with long payback periods that companies probably would not invest in.  NASA is now institutionally risk-averse.  They've gone from "The Right Stuff" to arthritic bureaucracy, but that's natural for a government organization that is hung out to dry when something goes wrong (see Hubble Space Telescope, Challenger, Columbia...).  There may not be a commercial reason to go to Mars, so NASA should do that.  There are certainly commercial and scientific reasons to go to the moon and set up a permanent base for many things: science research (the far side of the moon is an ideal place for giant telescopes, radio and optical) and mining (Helium 3 can be mined on the moon and may be the next great fuel). This seems like a place for an industry/NASA team to figure out how to do such things.

If you've read my earlier postings, you'll know that I think current government spending levels are  unsustainable and the only way out is massive spending cuts - on the order of 50% of the fed.budget. I think an actual collapse of the US is not out of the question, and an economic collapse may even be considered "likely".  Given that, how can I reconcile a desire for manned space flight?

Look, Mongo just simple engineer.  I can't solve all the problems in the world. But it seems to me that one of the main problems we have in trying to cut the budget is that everyone has some favorite program they refuse to see cut.  There are legitimate things for the federal government to do, and defense is one of them.  Anyone who doesn't see the defensive advantages to a good space program frankly doesn't understand much about military strategy.

Perhaps some of the money that's going to things that are clearly not government duties (health care, prescription drugs, bank bail outs, auto company takeovers, student loan takeovers, bull crap global warming studies, and on and on) could be used to keep a manned space program while we try to replace the shuttle.  A short term and long term solution, if you will.  Short term, the shuttle is a clunky old vehicle, but it works.  Like most sane people don't throw out an old but running car when the budget is tight, the shuttle can still fly.  No one sets foot on board without knowing they have a roughly 1% chance of dying; I'll bet you find plenty of people willing to go.  Long term, we get a different manned program; preferably with newer, higher tech.  Longer term, we work on that Mars mission.  And if a collapse occurs, all bets are off, and everyone will be too busy trying to survive to worry about national prestige.
Posted by SiGraybeard at 9:01 PM