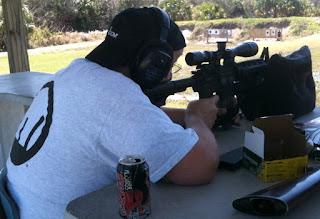 Mrs. Graybeard and I got a few hours of range time outdoors today, on a beautiful clear blue April day.  That's me working on a hundred yard target.

It has been spring in Central Florida for a month now, and the nastiness of summer is approaching quickly so we don't know how many more chances we'll get for some good time outside.  Some years, spring lingers until Memorial Day around here, with days in the mid 80s and nights in the 60s.  Other years, days reach into the 90s by early May, and the pattern of daily thunderstorms starts by the end of the first week in May.  The NWS says this February and March have been exceptionally cold for us; I think of that as lucky and hope our luck holds.  Northerners get melancholy in the fall because the wonderful summer weather that they have enjoyed is coming to an end and the dreary winters are approaching.  It's the opposite here in Florida.  I get melancholy because the awful summer is approaching.

We started off putting a few hundred more rounds through my XD sc (see below).  We brought our S&W 22A and traded off guns, both of us shooting both the 9mm and the .22LR.  Then, for the first time in both of our lives, we went to a 200 yard range to try precision rifle shooting.  This is bench rest shooting, only; no prone shooting, no standing.  Our rifles were my Nylon 66 in .22 Long Rifle, the first gun I ever "owned" in my life (of course, when you're a kid, mom and dad "own" it) - I've had it since 1969 - and our AR-15, a High Standard outfitted with a BSA "Sweet 223" scope.  The AR started out as their model HSTX6551, but I've since removed the plastic forearm and replaced it with a quad picatinny rail. 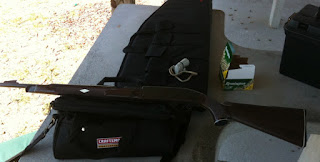 My dear old Nylon 66.  I've taken this to several ranges in the last year since we've gotten serious about self-defense/self-reliance.  Virtually everyone who sees it says either, "Isn't that a Nylon 66?  I used to have one of those - sure wish I never sold it", or "You've got a Nylon 66!  I still have mine, too".  Remington made somewhat north of a million of these semiautomatic 22 rifles from about 1960 until about 1980 and you still see them at shows all over Florida.  Typical price for one of these brown ones would be about $350.  When I took it out of the closet, the disintegrating cardboard box said $49.95. 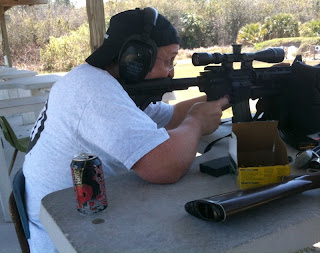 After checking the rifle zero I set up a couple of months ago at 50 yards and finding it was still good, I started working 100 yards.  It was really pretty easy to hit on the circle at 100 yards.  Of course, my targets are 8" across, so that's not a very challenging target for you expert riflemen, but we're getting started.  Mrs. Graybeard joined the fun, too. 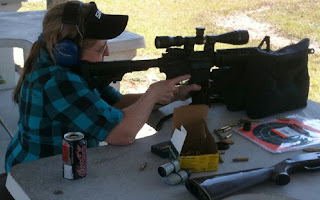 When we weren't shooting the AR, we were shooting the Nylon 66, at 50 yards with iron sights, tearing targets to ribbons.  This is one after a mess of shooting, covering one target and ventilating the new one.  I also shot lots of other targets still left out on the club range. 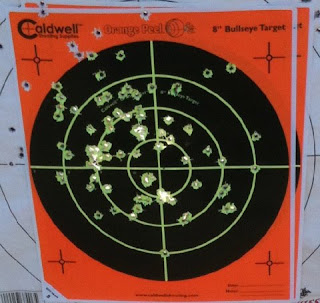 The real adventure was 100 yards and 200 yards.  Mrs. Graybeard and I shot to 100 and probably put 120 rounds downrange between us.  The targets ended up looking like this: 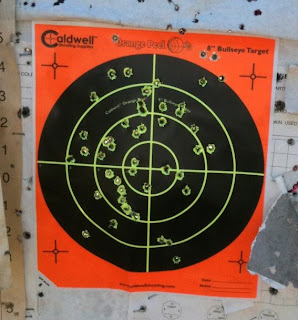 Then I decided to go for 200 yards.  We had the range to ourselves, so I took the hike down to set up the targets.  With the scope limited to 12x, I couldn't tell if I was hitting these Caldwell targets, but there was a large Casey target that had fallen to the dirt some time ago, and wonder of wonders, actually stuck to the backing paper.  I could see this one.  Took me a while, and I emptied out a few 30 round mags before we called it a day.  I knew I was near the target and hit it a few times, but didn't really see it well until I walked back down the 200 yards. 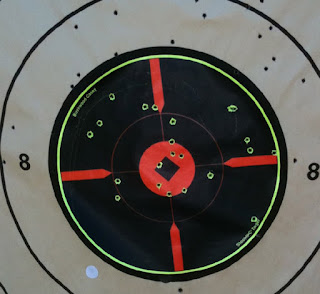 I know that's pretty trivial to you expert riflemen, and I know a lot of you could do that with something less than a 12x scope.  But I've never tried to do benchrest shooting before, let alone out to 200 yards.  Here in Florida, there is hardly any need for shooting that far - it's not like you're going to shoot an elk on the next mountain ridge 1000 yards away - and hardly any place to practice it.  Probably the main reason we joined our gun club is access to this 200 yard range and a "high power rifle" range that extends to 600 yards.

So it was a very nice day on the range, getting some "group therapy".  I took today, Good Friday, and yesterday off just to relax a little.  Beautiful day, fresh breezes, and the smell of gunpowder.  What could be finer?
Posted by SiGraybeard at 9:39 PM