Guess I'm Just an Enemy of the State 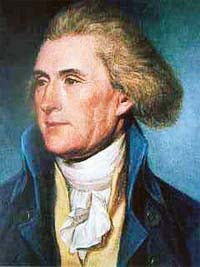 Thomas Jefferson, certifiable genius, would be an enemy of the state today.

Monica Crowley (that's Dr. Crowley to you) summed it this way in the Washington Times yesterday:

If you have small-government, traditional values, you may be considered by your own leadership to be an enemy of the state.

Last spring, right after President Obama was inaugurated, the Department of Homeland Security released its report "Rightwing Extremism: Current Economic and Political Climate Fueling Resurgence in Radicalization and Recruitment" under number IA-0257-09. Being a curious guy, I read it. Let me save you some effort if you haven't read it; it's virtually a fact-free document. There are no statistics cited - certainly not the level of statistics I would look for in engineering - no evidence cited, no references, no bibliography, nothing of any substance - except for a few references to Timothy McVeigh and a few crimes that could arguably be linked to rightwing "Movements". It's argument from the position of "because I said so", not the way scholarly or even legal arguments are made. You could just as authoritatively argue that these were isolated crimes with nothing in common. They use the phrase "rightwing" to mean "hateful" as if there is no hate anywhere else in the political spectrum.

Compare that to "LEFT-WING EXTREMISM: The Current Threat", issued in 2001 by the US Department of Energy, Oak Ridge, under number ORISE 01-0439 and you get an entirely different paper. Instead of being printed on fancy graphical backgrounds, it looks like a research journal article: plain white backgrounds, double-spaced. Every paragraph with claims is footnoted. There's four full pages of bibliography.

The 2001 DoE paper looks like a scholarly research paper done by professionals (it is credited to a Ph.D. author). The 2009 DHS paper looks like an 8th grader's assignment, hastily written in a few minutes but made to look pretty in PowerPoint. (Mrs. Graybeard's rule for presentations to stupid managers: use landscape format with pretty backgrounds and you can say anything).

It doesn't take much research to realize that most of the violent demonstrations have been organized by left wing groups. Whether its protesters at economic summits, environmentalists or just having SEIU beat up people for you, these are not "small-government, traditional values". Perhaps the administration should look at little more closely at their fellow travelers for true "enemies of the state".
Posted by SiGraybeard at 11:25 AM