From today's emails, I find that a company called Eviation announced an all-electric powered small plane at this year's Paris Air Show.  The company showed a prototype of the aircraft, rated for a 600 mile range.  I don't know if they're doing it here, but pilots ordinarily like to have about 1/4 to 1/3 of their fuel available for contingencies and I assume 600 does not include contingencies.


Omer Bar-Yohay, CEO of Eviation Aircraft, made the announcement:


“At a time when we are more connected than ever, our mobility options must adapt to reflect this new, efficient future. Whether it is a zero emissions, low-cost trip from Silicon Valley to San Diego, or Seoul to Beijing, our all-electric aircraft represents a chance for people to move with the speed and impact our global economy now demands.”

I have to point out that "zero emissions" only applies only to the exact moment when the airplane is running and completely ignores how it got to that point.  Before I go into that, though, I think it's reasonable to ask, "what's the big deal?" 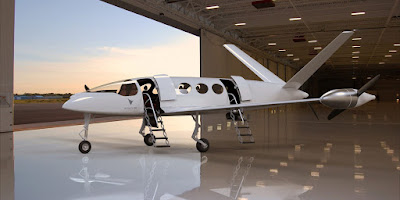 I'm not aware of electric planes on the market because I haven't cared to look.  Solar electric airplanes go back decades.  I don't think the technology is exotic or that this is some sort of technological tour de force.  Anybody who has ever seen a Radio Controlled model of a flying Snoopy on his doghouse, or some of other crazy things seen at RC shows will realize that the golden rule of aviation is that anything can fly if the lift to weight ratio is greater than one.  Stick on a big enough engine or make a big enough wing area and you're done.  Making an electric airplane means enough engine or wing to overcome the horrible inefficiency of the propulsion system compared to gasoline.  As I pointed out weeks ago, "While battery makers desperately try to figure out how to reach a specific energy of 450 Wh/kg (Watt-hours per kilogram), gasoline already offers 12,000 Wh/kg."  I don't think it's a stretch to say they'd get at least twice the range if they used Av gas instead of batteries.  Perhaps three or four times the range.

Earlier this week, several outlets reported a study from the Swedish Environmental Research Insitute that the "carbon footprint" of producing the batteries for an electric car was equivalent to driving for 8 years.  This ignored recharging the batteries for the life of the car, which is obviously coming from an electric power generating plant somewhere, so more than likely generating CO2 itself.  I'm sure you've seen electric cars referred to as coal powered.


The report shows that the battery manufacturing leads to high emissions. For every kilowatt hour of storage capacity in the battery generated emissions of 150 to 200 kilos of carbon dioxide already in the factory. The researchers did not study individual brand batteries, how these were produced, or the electricity mix they use.

The study looked at two models of electric cars, a Nissan Leaf and the Tesla Model S, containing batteries of about 30 kWh and 100 kWh.


Even before buying the car, emissions occurred corresponding to approximately 5.3 tons and 17.5 tons of Carbon Dioxide. The numbers can be difficult to relate to. As a comparison, a trip for one person round trip from Stockholm to New York by air causes the release of more than 600 kilograms of carbon dioxide, according to the UN organization ICAO calculation.

Unless I miss my conversion (or misunderstand their units) the 17.5 tons of CO2 to manufacture the Tesla's batteries is equal to about 26 round trips flights from Stockholm to New York.  The 5.3 tons for the Leaf corresponds to 8 trips.  The electric airplane will not be immune to this sort of reality.

The way I look at it, wanting to buy an electric vehicle (airborne or road) is virtue signalling.  Wanting to sell an electric vehicle is more like the old quote, "there's a another one born every minute."  You want to spend money to feel good?  We'll be more than happy to take your money!