The One Factoid About the Illinois Mess You Can't Miss

By now, I assume everyone has heard that Illinois is on the verge of financial collapse - if not over the edge and already collapsing.  There's just one aspect to the story I'm not seeing widely discussed.

Courts have mandated payments that consume 100 percent of the state's revenue.

The article linked above, on Fox News Politics, comically says, "even the lottery isn't safe", and is completely missing the point.  Yes, the state lotto requires a payment from the legislature each year and there's no funding past June 30.  Yes that means the state is planning to halt Powerball and Mega Millions sales.  And, yes, that means if given a choice between a smaller, lump sum lottery payment or the "guaranteed" monthly payments, take the lump sum.  But talking about the lottery is burying the lede: Illinois is in a really bad situation even for Illinois.


But the problems are years in the making, caused in large in part by the state’s poorly funded pension system— which led Moody’s Investors Services to downgrade the credit rating to the lowest of any state. The state currently has $130 billion in unfunded pension obligations, and a backlog of unpaid bills worth $13 billion.

The state is at junk bond status.  Re-read that sentence a couple of paragraphs above again.  They need to spend 100% of their revenue just on court mandated payments.  The Illinois Supreme Court ruled in May 2015 that pensions for current government workers can’t be modified.  If 100% of the revenue has to go to the pension funds, that leaves no pay for teachers, no maintenance, no repair of municipal systems, no lights for the state buildings, police or anything else at all.  Every state function has to shut down.


Reports have suggested the state could be the first to attempt to declare Chapter 9 bankruptcy -- but under the law, that’s impossible unless Congress gets involved.

“Nobody here in Illinois is considering bankruptcy—first of all, it’s not allowed,” said Steve Brown, press secretary for Illinois House Speaker Michael Madigan. “Second of all, it would damage the reputation of the state and it’s just not necessary.”

Confidentially, Mr. Brown, don't worry that the rest of the country would think less of you.  Filing for bankruptcy wouldn't make us think any less of your state than we already do.

CBS Moneywatch reports the reason for the problems is Illinois made promises in pension plans but then didn't keep them.


But critics say some of those pensions carried overly optimistic assumptions, especially given periods of market turmoil like the global financial crisis, which ate into investment returns. The state's general assembly wasn't required to fully fund pensions, which meant tax money was spent on other priorities such as schools or infrastructure.

Note that CBS isn't saying the state spent the money to fund the programs through investment vehicles and it just hasn't worked out.  The statement says the state government "wasn't required to fully fund pensions", so they spent it on other things.  I'm not saying it's related to the fact that as soon as I started to type "Illinois politicians pension promises" into my search bar, before I finished the second word it offered to autocomplete with "Illinois politicians in jail".  As the saying goes, I'm not not saying it either.

If you're a numbers geek, you will probably find the details on the Illinois pension fund problems in this report from Illinois Policy.org illuminating.  I'm not familiar with the organization, but the page seems reasonable in the sense of being numbers oriented and not throwing inflammatory language at anyone.  Their website says,

Illinois has real problems with its pension obligations, and the sad story (as others have reported) is that it's likely to happen in  other states.  There have been calls to split Illinois into more states and assign those pieces to their neighboring states.  I have no idea what that would do to the legal obligations, but how would you feel if pension obligations you had no part in creating from another state were suddenly billed to you?   Is it "fair" or remotely reasonable to have Indianapolis taxpayers be put on the hook for the bad deals of Chicago politicians?  Is it any more fair if the Fed.gov gets involved and pays money it doesn't have either to bail out pension plans?

It might surprise you that I come down quite a bit harder on the politicians than the employee unions on this.  The unions did what anyone expects them to do: demand and pressure for more and more benefits for members.  The politicians who accepted those contracts and then didn't do their part to make sure they were funded bare the blame.  The unions say "pensions are a promise" and are partly right.  Keeping those pension agreements is more than just a promise; it's a fiduciary responsibility of the government that made them.  And I use government and responsibility in the same sentence without a trace of irony. 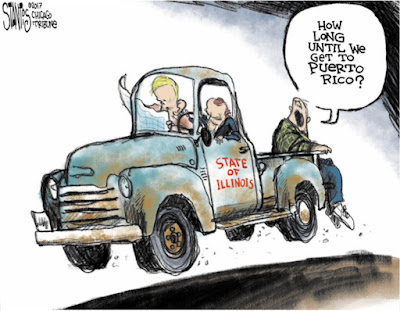