It's last Thursday.  Holiday weekend coming.  I don't know about where you work, but where I work, we push until the last minute, then everyone wishes each other a nice, refreshing weekend and we head home. If you're Nancy Pelosi, you figure "no one's watching - time to push some shit through!".


Last night [note: 7/1], as part of a procedural vote on the emergency war supplemental bill, House Democrats attached a document that "deemed as passed" a non-existent $1.12 trillion budget. The execution of the "deeming" document allows Democrats to start spending money for Fiscal Year 2011 without the pesky constraints of a budget.

The procedural vote passed 215-210 with no Republicans voting in favor and 38 Democrats crossing the aisle to vote against deeming the faux budget resolution passed.

More story here. Quote of the Day from Rob Long


What spineless toads! What useless bags of bones! What inspirations of cowardice and feckless do-nothingism! Irrelevant, pompous, lazy, crooked, dishonest, shiftless lumps of animal turd! May they suffocate in their own sloth and flatulence! Thieves, each and every one of them. Frauds and mice, the 215 Democrats who voted for this criminally negligent piece of non-legislation. The entire sick, decrepit, on-the-take, creepy lot of them -- the human oil spill that is the Democratic House Majority -- should crawl on their scaly, reptilian bellies and beg forgiveness for their derelict, chicken-hearted shirking of the one damn thing they're supposed to do! And we shouldn't give it to them. No. Never. Never. Never. Never. Never. They're a craven, appalling, inexcusable insult to all Americans who do their jobs and pay their taxes. And especially to the men and women in uniform who do theirs.

Tarring and feathering always struck me as such a terrible thing.  Tar has to be hot, it must be extremely painful to go through.  Just seems like one of those things that we can be glad are in the past.  Then something like this comes along and I started looking at feather pillows and dreaming.... 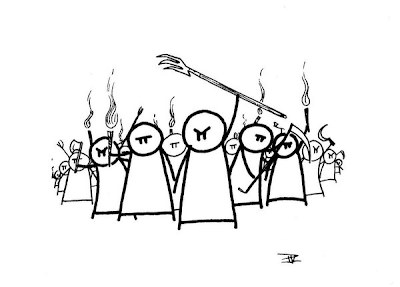 Posted by SiGraybeard at 3:12 PM