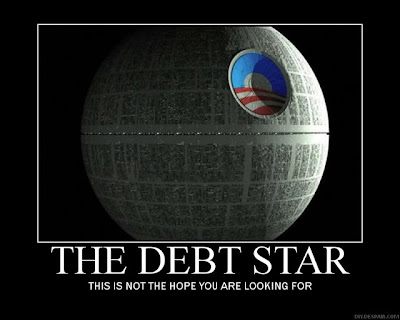 Over the weekend, James Pethokoukis at Reuters ran a story enlarging on some rumors that have been going around for a while, rumors that the administration "is about to order government-controlled lenders Fannie Mae and Freddie Mac to forgive a portion of the mortgage debt of millions of Americans who owe more than what their homes are worth."  The estimate is that 20% of the mortgages in the US are "under water".  That's around 15 million mortgages with a total negative equity of $800 billion.


1) Republican leaders believe this is going to happen since GOPers and Democratic moderates in the Senate are unwilling to spend more taxpayer money on more stimulus. But such a housing plan would allow the White House to sidestep congressional objections and show voters it is doing something tangible about an economy that seems to be weakening.
2) Wall Street banks are alerting their clients privately to this possibility.

Most people seem to realize this is a bad idea and are opposed to it.  It may be a bad idea, but it also may a be politically motivated idea - to get Stupid party voters to show up and vote for the Stupid candidates. Perhaps it could stem the tide that is running against them right now.  Giving Stupid people free money is a proven vote-getter.

Why is this a bad idea?  Let's start with the simplest question: where does this $800 billion come from?   We are deficit spending at a record pace, so it's can't simply come from taxes.  Sure, some will come from taxpayers today, but most of it either comes from selling bonds, which our children and grandchildren will have to pay back, or it will come from the creation of money from thin air, which will cause inflation now and for years to come.

What about the people who lived frugally, and well within their means?  Do they get rewarded by paying taxes to bailout the 20% who got stuck in a bubble market when the music stopped?

There are always unintended consequences to every action a government takes.  In this case, the biggest benefit really flows to the bankers.  Everyone knows the banks are being hurt by having so many bad loans out there; so like the first stimulus program, and the TARP money, this goes to make the bankers.

And in return for bailing out the bankers, you get to enslave your children and their children to the government.  No, thanks.


We can't go on blowing bubble after bubble.  In general, stimulus programs are not capable of working - see The Broken Window Fallacy.  Something like the "cash for clunkers" can pull demand in from the future, but create a crash in the future.  You can't pull in demand forever: that requires infinite supplies.  It can't happen.  Japan has tried virtually everything we're trying, and they still have lost 20 years (it's not a lost decade - it's more like two decades). Watch the video on Japan at the National Inflation Association.  It will curl your hair.