It must be a slow news cycle for people (in this case Fox News) to be putting out headlines like this:

I know there's a lot of talk of the damage a solar flare can do, including burning out the power grid and generally making it seem like we've been nuked.  And a really big flare can do that.  The biggest flare ever recorded actually killed some people, in the early days of land telegraph.  The long straight wires (something new in all of history) picked up energy from the flare and shocked some telegraphers.

Not this one.  If you want to look for that size flare, set the alarm for a few years from now (here's the kicker: nobody knows when).

See, solar flares vary over orders of magnitude in size.  The smallest go from C1 to C10.  Next up, M class flares also go from a 1 to a 10.  Finally, the biggest flares are X class or X-ray flares.  There's no top to that scale, but in the peak of the last solar cycle, back around 2003, X class flares were hitting every month.  An X10 flare hitting directly can make auroras visible in the southern US.  A monumental flare in 2003 made them visible in north central Florida.  I have heard a big flare in the previous cycle (1990s) caused an aurora visible in the Caribbean.

This flare was a C3.  This was pretty, it was neat to look at, but the most it's going to do for us is move some auroras a little farther south than usual, and maybe add some static to the shortwave bands.  If you're in the northern part of the country, or Canada or such, enjoy the show.  Seeing a good aurora display is on my bucket list! 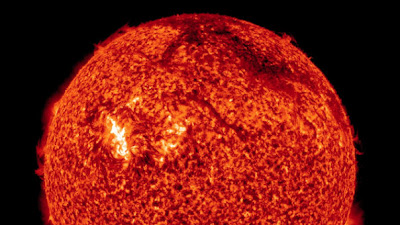