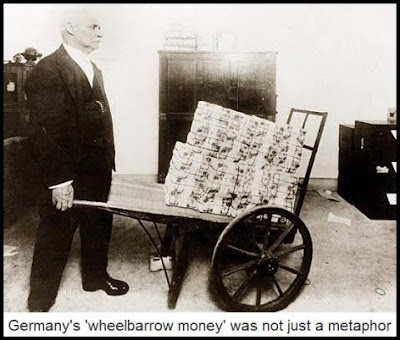 If you read "regular" economics information and blogs, you may find some debate on whether we will be undergoing deflation or inflation; that is - whether we're likely to be going into a deflationary death spiral (read "collapse" or "Greatest Depression") or an inflationary death spiral (read "Weimar Republic" or "Zimbabwe").  Some groups speculate hyperinflation is coming.  The argument against hyperinflation is probabilistic; they argue that true hyperinflation is historically rare, and that collapses are much more common.  In my experience in daily life, we are seeing signs of the expected inflation.  The official statistics - the US Bureau of Labor Statistics CPI - disagrees.

Inflation is a topic I've written on extensively.  My second post on this blog concerned this, and I've addressed it other times such as this one:


Inflation is always a result of monetary policy.  Always.  How does inflation occur?

Our Secretary of Homeland Security here at Castle Graybeard, Mrs. Graybeard, and I have been talking about how much price inflation is working into food prices.  AOL Money & Finance page Daily Finance reports Walmart has been quietly raising prices - some 60% or more.  Read the full article.


Some of the price hikes were considerably larger. For instance, the price of a 32-ounce bottle of Windex household cleaner jumped 50%, a 12-ounce box of Quaker Oats instant grits climbed 65% and a 50-ounce container of Tide detergent rose by more than 50%. A spokesperson for the Bentonville, Ark., company could not immediately be reached for comment.

One of the tactics companies use to hide inflation in their prices is to sell smaller packages at slightly higher prices, rather than raising the price on the familiar size by a higher percentage.  Ice cream makers shrank their half gallon containers a while back, many other manufacturers, such as Doritos and other chip makers, and candy bar makers followed suit.  A so-called gallon of paint we just bought says it's 120 oz - not 128.  Even Moe's catfood can is 5.5 oz, down from 6.

The most widely reported Consumer Price Index, the "Core CPI"; colloquially called the "Cost of Living Index", which does not include food and energy costs - as if life were possible without them - says we are undergoing relatively benign growth.  Shadowstats - who keeps the CPI calculated the way it used be - shows total inflation of around 10% per year.  My guess is that food prices are running higher than 10% inflation.  We keep reading reports of poor production in all sorts of crops this year; that would argue for higher food inflation to come.

Blogger FerFal from "Surviving in Argentina" has seen all this firsthand.  Argentina underwent a collapse, and in their re-building has seen high inflation.  He offers advice on dealing with the inflationary spiral, There Will Be Poor - Don't Be One. I note that FerFal is apparently planning to leave Argentina and move to the US - as the majority of people that can afford to escape the horrible conditions in Argentina have left the country.