In Praise of Technology

As I mentioned the other day, I was across the country from the Silicon Swamp, in Salt Lake City, to attend a professional conference.  For those who think the USA is over, an interesting perspective was seeing the graduate students from China and France speaking to each other in English - it was their only common spoken language (and, no, these were not foreign students in US schools - their papers credited their institutions in those countries).

Whenever I fly cross country, I'm impressed with the technology - and I work in aviation.  It's the most amazing technology we take for granted.  Every day, thousands of people sit in little seats hurtling at hundreds of miles an hour, through an environment that would kill them in seconds if they were exposed to it.  Aircraft travel predefined routes in the sky, often changing headings at imaginary cross roads up there - and they do it 24/7/365 with almost no concessions to weather (and no reliance on GPS, which will surprise kids and those who think navigation couldn't exist without their handheld GPS).  Civil air transportation has an enviable safety record, and is generally remarkably trouble-free, despite the occasional problems we hear of on the news.

But where I'm going (ha!) with this is more fundamental.  My schedule allowed for some sight seeing and with our first free hours out west, we headed to the Kennecott Copper Mine, also known as the Bingham Canyon Mine, southwest of the city.  This mine has been producing copper since 1906, over 100 years (!), and they have development plans out through 2020.  This one mine produces 17% of the US' output of copper. 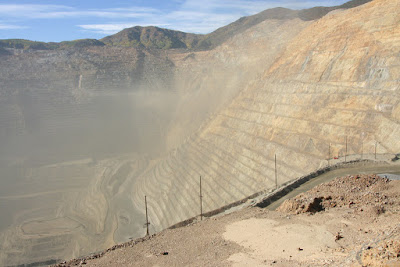 The scale in this picture is difficult to grasp.  At the lower left are a pair of the large dump trucks that haul the rock for processing, barely visible in the distance.  These trucks are monsters: they're about the size of a two story home, with tires over 12' in diameter.  While this shot doesn't show the whole pit, it is reported to be over 2.5 miles wide at the top and around 8/10 of a mile deep.  Plans for future growth extend it downward.  I am in awe of this operation.

For a non-technical discussion of how this whole process works, go to the video, "From Ore to More" on the Kennecott website.

As rockhounds, Mrs. Graybeard and I have vacationed in places where we can collect interesting rocks and crystals.  Among them was the Keweenaw Peninsula of Michigan, home to some of the earliest copper mines in the US.  In this area, the copper was often found as "float" copper - nuggets of rather pure metallic copper.  In WWII, the Michigan copper was preferred because much of the copper in the area has a higher percentage of silver which aided conductivity.  Collectors sometimes find pieces of float copper that have a portion which is silver.  It boggles my mind that an operation like the Bingham Canyon mine can mine copper profitably while the mines in Michigan can't. 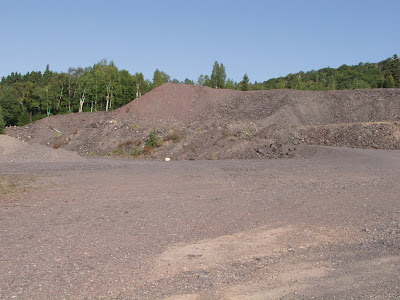 Piles of tailings dumped from the old mines - like this one near Houghton, Michigan - still yield copper specimens to collectors like us, half a century since the copper mines shut down up there.  There are local stories of huge pieces of float copper on the bottom of Lake Superior there, that are too heavy to retrieve economically.  That was when copper was $2.50 a pound.  Now, at over $3.50/pound, the result may be different.

A very interesting place to visit in Michigan is the old Champion or Beacon mine, near Marquette.  This field is strewn with literally tons of specular hematite, the highest grade iron ore there is.  That's what all the gray rocks in this picture are.  The story we were told was that this hematite had been mined and was being prepared for shipment, when the market crashed, or dipped badly, making it unprofitable to ship down to the steel mills in Pennsylvania to refine.  I know that at rock shows, a small piece of this will fetch a dollar or so.  In this place, you could park a pickup truck, load it with as much as you wanted and drive away. 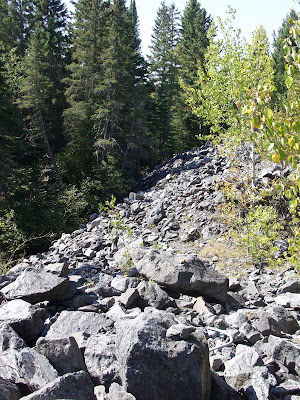 Obtaining, and refining raw materials, natural resources, is the backbone of any technological civilization and the core of our advanced life. From time to time, you hear some alarmist say we're running out of metals.  If we were really running out of iron, do you think that field would still be there?  If we were running out of copper, do you think tons of float copper would be littering the bottom of Lake Superior?  When eco-NAZI baby killers protest mining and "tearing down the mountains" all they are doing is raising the cost and moving production elsewhere.  American companies are the best stewards of the environment on earth.  Didn't they look at the videos from the former Soviet Union after the collapse, and see the horrible pollution there?  Haven't they seen how bad the oil platform area is in Nigeria, where they have the equivalent of the Deepwater Horizon well blowout every few months?  When the propagandists behind the Story of Stuff complain that we're "stealing from the third world" materials "that are ours but somehow located on someone else's property", they are indicting themselves.

Mining is hard, hazardous work, but essential to anything beyond agrarian life.

Look around you: everything you see that hasn't been harvested from the ground has been made.  The metals were mined and refined.  The first mechanical pieces were made by a machinist or tool and die maker.  The plastics were created from feed stocks that were mined or synthesized from others that were.  The wood was harvested and made into lumber.  Without this technical infrastructure we would soon be shivering in makeshift hovels.  I'm sure the eco-NAZIs would love it if large portions of the population died off, but I celebrate mining, refining and engineering.