Can We PLEASE Get Some Sanity?

Can we please get some sanity about guns into the public schools?

I guess I've hit my limit.  I'm a patient guy - maybe too patient, at times - and I've let a lot of idiocy go by without going nuts, but I... just... can't ...take it any more.  Look, teachers, this is not a gun, but a 7-year old boy is suspended from school for producing it and they called it a gun.  Anyone who isn't profoundly retarded will tell you it's a partially eaten Pop Tart. 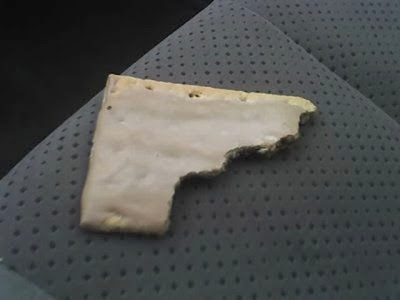 It doesn't even look like a gun, unless you're so hoplophobic you hide from clouds.  If anything, it reminds me of a crude, off-center model of a flying wing airplane.

If someone is a teacher, or an administrator, then they must have gone through school.  They must have attended college.  It follows that they absolutely must have heard that "the symbol is not the thing".  This piece of common sense was drilled into my head in elementary school math, but it's taught in language classes, philosophy, and other places.  If I write the symbol "3" it's a representation for a concept.  It's not the number.  That's why they use the term numeral for a written representation of the number - to emphasize it's a symbol and not the thing.  If I draw a picture of a gun, it isn't a gun.  It's a drawing.

It doesn't matter if the kid produced this half-chewed Pop Tart or if he produced a photo-realistic drawing, it is not a gun and does not need to be treated like one.  Look, teachers: this is not a gun: 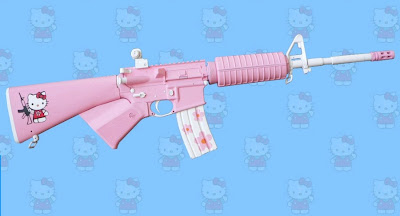 This insanity has to end.  A 5th grade girl is suspended for having a torn-off, L-shaped piece of paper that only resembles a gun in the most abstract sense.   Not just suspended, she was tormented to the point of recurring nightmares by the school, telling her they should call the police on her, and physically searched in front of her classmates - whom she says called her a murderer.  I can excuse a kid a lot sooner than I can the teachers, administrators and school "resource officers".

And, of course, there a similar stories from all over the country.  Not to mention when a real gun is involved, and a kid becomes a hero by risking his own safety to take down an attacker, he gets suspended!  He was "involved in an incident with a gun" - another shining example of "zero tolerance means zero sense".

My kids are way past out of school, and this nonsense wasn't going on then.  If you have kids in school, it's time to fight this.  This looks like nothing so much as a propaganda campaign to get kids so terrified of guns that they'll be hampered for the rest of their lives - an inclined to vote for gun banning politicians.  Soviet propaganda at its finest.