First off, back a few days ago, an anonymous commenter asked


Do you know of any available resources to build freq hopping and encrypted radios available to the public. It might be a good project to get some of your engineers working on, perhaps using this as a foundation: http://greatscottgadgets.com/hackrf/
All you need is a laptop and the Hackrf USB radio, throw on a GUI that makes signal strength and frequency selection easy, encryption and frequency hop loads, and you've got a military grade radio.

I haven't kept up with this tech - the last time I saw similar things (and it may have been a dead end on the Internet) it was certainly not military grade, and I wasn't even sure it was Belkin grade.  That is, I'm not sure it was as good as commercial WiFi you can buy anywhere pretty cheaply.  I can't say I'm an expert at this, having just looked it over, but this is not a usable radio; it's a digital board that allows you to experiment with software defined radios (SDRs).   The HackRF page on Ars Electronica says


There are relatively few people in the world with the knowledge and tools required to develop new radio communications hardware, but there are many millions of people who have the ability to program a computer. General purpose computers are widely deployed, and opportunities to learn how to program them are available to a huge number of people.  HackRF gives all of those people the capability to explore the radio spectrum and develop creative new ways to communicate.

The difference is that HackRF doesn't seem to have any receiver sophistication and only a very low power transmitter stage that I can see.  I freely admit I could be wrong, but the block diagram sure doesn't show anything.  One of the paradoxes of SDRs is that they don't eliminate the need for filters; if anything, they become more important due to the aliases they respond to.  He describes it as combining "Licorice, Lemondrop, and Jellybean into a single USB-powered software radio".  Maybe I'm searching in all the wrong places, but a few searches with Bing retrieve nothing on them.  I don't think this is a GUI away from being useful, but hey!, prove me wrong!

SDRs for experimenters are not new at all.  Hams play with SoftRock, (also) a low power CW transceiver (Continuous Wave, the name hams tend to use for Morse code communications) that plugs into a USB port and a sound card.  These guys produce an HF SDR, transmit and receive, that is architecturally very similar to one I recently completed for a commercial design (naturally, I prefer the design trade choices that I made over theirs).  RFSpace has a product line of SDR receivers.   FlexRadio is a staple in the ham world; their SDRs are considered among the finest radios on the market.

I recommend getting an amateur radio license because it brings with it the privileges to experiment with new modes and new technologies all on your own.  You can buy an FRS radio to talk to someone, but if you're a ham, you can invent your own mode with an outwardly similar radio, because you're expected to understand the technical requirements.  The technician class license conveys all amateur privileges above 30 MHz, plus it gives holders some privileges in the HF spectrum (high frequency or shortwave - capable of worldwide communication).  The American Radio Relay League is the dedicated organization that is closest to a "universal American ham club", although like the NRA, the ARRL is often criticized by non-member hams (well, not as often as the NRA).  If you want a completely non-official page, this guy seems pretty good.

If you want to experiment with modes that require more than audio bandwidth, you need to be above 30 MHz, and you're going to need to experiment with radios (or have someone in your group that knows radio design).  Simply, most amateur gear is either surplus commercial gear or designed from the ground up for the narrowband modes that dominate.  Except for TV - hams have done regular TV at 400 MHz and above and are now doing digital TV.  A few months ago, I met hams who were buying surplus video equipment at WiFi frequencies and above.  They were playing with extending it out to long distances, and had made WiFi connections at 125 miles.  There is a ham band that overlaps the band allocated to WiFi, so the surplus gear is being used for ham purposes all the time.

As I said the other day, the use of ham radio to send encrypted messages, like a PGP-encrypted text file, is illegal, although the Feds have routinely allowed all sorts of things when a disaster happens.  If there is a total failure of civil order, I can't imagine this would be an enforcement priority.  Sort of like this old Far Side cartoon: 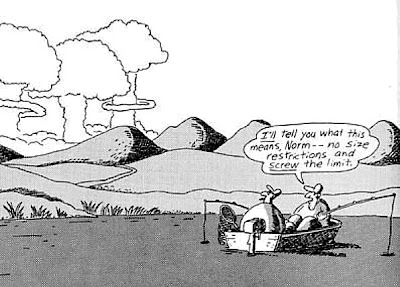 I think if you're going to learn how to set up and use communications, a ham license gets you the ability to do it in a licensed and permitted way. You can save the encrypted stuff for when you need it.
Simply using UHF or microwaves on a point to point link (no repeaters) will give you almost total anonymity.

Finally, a couple of people (here and in email) have asked for book titles or other ways to learn about this field.  Most of the books I know of are at least somewhat mathematical.  Electronic Communications by Robert Schrader is a very good book, often used as a junior college text or supplement in ham classes.  Spread Spectrum Systems by Robert C. Dixon is one of the standard books.  Both of these are available in several editions and are often found used or in library sales.  The ARRL Handbook, published every year, has long been considered a very complete summary of modern ham radio theory and practice.  There's a difference between books published for working engineers and those published for school, where the aim is to impress the professors enough to become the textbook.  Because of this, I have a tendency to pick up old textbooks written from the working engineer's perspective.  I've often thought I've learned more from magazines and ham radio publications than my engineering texts, as those books have more insights per square inch than textbooks do.

Posted by SiGraybeard at 7:09 PM