One of the major advances in ham radio over the last decade or two has been the development of many more digital modes.  There are many reasons for this, curiosity and experimentation are two of the big reasons many hams get a license in the first place, but putting high horsepower computers on virtually everyone’s desk, most of which come with a DSP capability that was pure dream-world only a few decades ago plays a big part.  Put creative people together with advanced hardware and innovation is what happens.  Plus, the modes are popular with hams who just operate the radios the way most people operate their kitchen appliances.

These modes are aimed at keyboard typing speeds, not high speed data transfer.  Most hams chat on the air, and the design emphasis has been on modes that allow easy, natural conversation without a lot of delay for error checking and correction.  They also tend to be aimed at overcoming the common propagation issues hams face: fading, interference from other stations, and multipath (where several versions of the transmitted message come over different propagation paths and reach the receiver almost simultaneously) are the big ones.  This is keyboard chat, much like texting each other.

There are currently at least a couple of dozen modes that can be found with many software programs that support them.  Any sound card based mode is going to emphasize signals in the audio bands the radios handle, usually that 3 kHz bandwidth that voice signals occupy.

What I’d like to think of as a best approach is a mode that sounds more like noise than like audio tones being played.  The best I’ve heard is a mode called MT63.  There’s a few bandwidths of MT63 supported in the cheap/free software, and MT63-1000 is 1000 Hz wide (audio tones from 500 to 1500 Hz) and it supports a typing speed of over 100 WPM.  100 WPM is pretty good, but everything you’ve read to this point takes just over 3 minutes to transmit (plus some time for overhead).  There’s an MT63-2000 that goes 200 WPM, too.  Here's a screen capture of my transmitter sending a short test ("testing testing de mycall mycall") in MT63-2000:

For those that have never seen this sort of display, it's an audio "waterfall display"; the numbers along the top row (500 to 2500) are the frequencies in the audio passband (in Hz), and the vertical lines show you an indication of the intensity of that frequency; reds are hot - high intensity; fading through yellow to green to blue, which is very low audio.  The vertical dimension is time.  The taller a stripe, the longer it lasts.  The software is DM780, by the way.

MT63 is a family of MFSK – Multiple Frequency Shift Keying – modulation modes.  That means many audio tones are used, and while there are many MFSK modes, what’s novel about MT63 is that it’s OFDM with FEC.  (FEC’ing what?)  OFDM means orthogonal frequency domain multiplexing; it has 64 independent tones in that 2000 Hz bandwidth (500 Hz to 2500 Hz) spaced at 1/64 of the 2000 Hz BW, and each tone is differentially Bi-Phase Shift Keyed (BPSK – sometimes called DPSK when differentially encoded).  It also includes FEC – Forward Error Correction – a method of reducing errors and increasing robustness.  FEC depends on sending redundant information, so the price for FEC is forward speed, but 200 WPM is pretty decent sending speed.  It will be slow for sending text files, but is good for tactical messages.  To be honest, I’ve seen professional systems that aren’t this sophisticated.

There are other good MFSK or PSK modes, but they all have a tendency to sound musical to some degree.  The most popular mode is PSK31, a BPSK mode with a distinctive audio sound, that runs at 31.25 Bits per second or roughly 20 WPM.  Many of these PSK or FSK modes use tones that change in some sort of rhythm and can sound like some sort of music.  An early mode was called piccolo, and the name was what it sounded like.  DominoEx16 is a fast MFSK mode, too, allowing 140 WPM typing.  It doesn’t incorporate FEC, but is said to be so good in its basic approach that it doesn't really need FEC.  It's very tolerant of frequency drift, up to 200 Hz/minute, something that might be important with radios built from spare parts.  It's also helpful with microwave frequency radios, since even relatively good crystals drift a lot when multiplied by thousands to around 10 GHz.  The only drawback to the mode is that it sounds more like a quick riff on a flute than noise.  It is a quick riff, though. Here's the same message as before, plotted from DominoEX16: 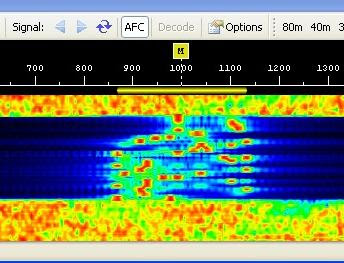 A mode that puts emphasis on reliability of communications rather than pure speed is called Olivia.   Olivia is another MFSK mode, which uses two layers of FEC; one in the the number of tones and protocol for switching tones, with another FEC layer in the information coding.  It is robust, very error resistant, but 39.1 WPM is the fastest protocol for Olivia.  Most contacts occur at the lower 24.4 WPM.  39.1 is still faster than the vast majority of people can receive Morse code, though, so it's still a good mode for conversing.   Here's a picture of the same text as the previous two transmissions using Olivia 1000/16

This message isn't done: in the DominoEX plot my entire message ("testing testing de mycall mycall") is above.  DominoEX and MT63-2000 take essentially the same shortest vertical space, (time) with Olivia 1000/16 taking quite a bit longer.  By the way: notice in this chart of Olivia formats, that it decodes as much as 14 dB below the noise in its bandwidth.  Better performance is at slower speeds.


Here's your problem:  You and your small group of rebel forces are trying to take out the power station on the forest moon of Endor, allowing the Jedi knights to take out the new Death Star.  You need to communicate stealthily so that the mighty empire doesn't detect you and send Imperial Walkers your way.  Unlike the movie, though, you find the Ewoks have been visited by natives of the planet Redneck ("You just might be a Redneck Jedi if you know the taste of Ewok") and they've been hunted to extinction, so you have to do it on your own.

The application I think of is modulating a small HT for UHF or microwaves with this audio.  If heard, it would probably be considered some sort of local noise source.  Especially if it was only present intermittently (if you’re not used to it, it will surprise you just how much radio noise is present, especially at lower frequencies).

"But old man!  I don't want to try to drag a radio and a laptop to communicate!  Don't you have anything better for me??"  ("There is no try!  There is only do...") sorry.  I think I will, but not tonight.  I think the killer app here is a little box that plugs into any HT's microphone and speaker jacks.  The box takes in microphone audio, digitizes it and turns it into these tones to transmit.  On the receive side, it takes the tones and turns them into bits that then are converted to analog voice that you hear in your headphones.  The box doesn't quite exist, but I think I can see how to get there.