The 800 Pound Gorilla In The Room

I've written before that we don't have a revenue problem; we have a spending problem.  With federal debt virtually at 100% of GDP, not even counting the major entitlements of medicare, social security, and the new Obamacare, we simply have to cut our spending.  In a few years, sooner if inflation causes interest rates to rise, all of our tax revenues will have to go simply to cover the cost of the interest on our debt; then there will be no spending on anything else.  No defense budget, no entitlements, nothing will be left.

It would be handy if there was a budget for 2011 to talk about, but our despicable congress refused to put a budget together, instead "deeming" it passed - avoiding their main constitutional responsibility.  Without a budget, the government is funded by continuing resolutions, such as the omnibus spending bill that was subject of flaming rhetoric just 10 days ago.  Not having a budget makes it harder to see how bad things really are.  I'm sure that was one reason they use this method.

In 2010, we borrowed around 40cents of every dollar we spent.  We can't go on that way.  Clearly, we need to cut spending by at least 40% to balance the budget.  We also need to count the real expenses, including those "off-budget" items like Medicare and social security. 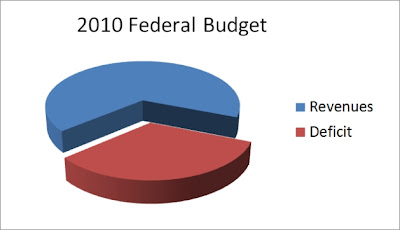 One other thing: you hear a lot about earmarks.  I'm not saying it's not a good thing, but cutting earmarks is doesn't get you there; they're simply not big enough to get us out of this mess.  For example, according to Taxpayers for Common Sense, in that 1.1 Trillion dollar omnibus spending bill, the earmarks totaled $8.3 billion, or 0.75 %.  When the spending needs to be cut by up to 40%, cutting earmarks doesn't get you anywhere.  Besides, congress is 99% corrupt lawyers: if you make "earmarks" illegal, they'll find ways around.

I've said that I find day-to-day politics pretty disgusting and this is a pretty good example why.  Still, we should contact our congress-critters and let them know we mean business.  I've heard dozens of pundits say that "those people" (that is, those opposed to this madness) want spending cuts but don't want it on their pet projects.  Our representatives probably believe that.  We need to convince them we're willing to see massive cuts to many government agencies, including closing some and sending people home.  Want to shutter NASA?  So long, it's been nice.  Want to shut down the national parks?  Just leave the gates open.  Want to call home our troops from overseas?  I'm sure the towns near bases would like having a few thousand more customers.  Get the picture?

The alternative really is collapse, and if that happens, the parks will close, the agencies will close and the troops will come home.  It would be better to have some orderliness to all this.
Posted by SiGraybeard at 10:14 PM