I Think I'm On The Wrong Planet 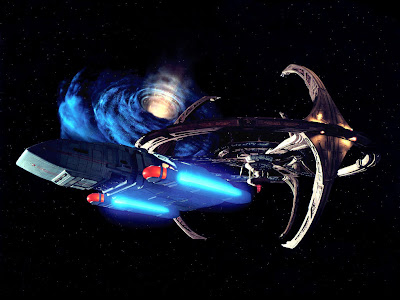 There isn't a day that goes by that I don't get a "WTF???" reaction when I read the news.  This isn't where I grew up.  This isn't the country I knew as a kid.  This isn't even the planet I grew up on.

Did I fall into some sort of wormhole, and I'm really on some obscure planet around Tau Ceti or Wolf 359?  I keep expecting to look up and see Worf, or Quark, or a shape shifter from the Delta quadrant like Odo.  There ought to be a babe with a funny looking nose any second now...

Where I grew up, the garbage cans didn't spy on you.

Where I grew up, we put mufflers on cars to make them quieter, we didn't try to make them noisier.  (Confidential to the morons in Congress: did you know that the noise from an internal combustion engines is one of its inefficiencies?  If it was perfectly efficient, there would be no noise, and the exhaust would come out colder than liquid nitrogen).

I remember, in the 1980s, when liberals were making fun of Reagan and his folks for saying nuclear war was survivable.  They wanted to die in neat little piles.  Now the democrats are talking about how survivable nuclear war is. Did that happen recently?  This fall?  Huh.

When did the world turn upside down?  As Instapundit says (as if he needs a link from me!)


They told me if I voted Republican, we’d be plunged deep into a scary 1950s-style pre-nuclear-war “duck and cover” posture. And they were right!

One thing that is constant is that we did do duck and cover drills under our school desks.  So maybe this is home....

but, no, where I grew up, we didn't think we could cure bankruptcy by borrowing more money.  No, people started businesses and worked hard to provide for themselves and their families, not expecting handouts.

When did they start making laws so complicated and so big that congress not only can't read them, but thinks it's a waste of time to read them?  Why is an obscure weapons treaty so incredibly important that it has to be rushed through a lame duck, over the Holiday session, and signed without reading it, either? Are they trying to weaken the US?

Gort, are you out there?  Gort?  Klaatu barada nikto.