An Interesting Moment At Work, Today

We have a weekly staff meeting at work, every Wednesday at 11 AM.  My boss, thankfully, wants this meeting about as much as we do, but holds it because his boss told him to, which means all of us are there because our boss told us to be there.  Anyway, our boss was late to the meeting, and the group of seven engineers (most of us "higher pay grade" engineers, which is to say older guys), started talking about the economic situation.  We're a group with diverse backgrounds; three of us not even born in the US, and of the seven, six believed the Euro can't survive; the seventh didn't seem to be following any of this.  The consensus seems to be that it will definitely be gone by this time next year, and summer to early fall seems to be what the guys are thinking.  A guy whom I shared an office with 10 years ago, and who was very financially savvy, said that he had recently gotten out of stocks and into bonds for safety for a while.  I've said before that I've positioned myself with as little exposure to the broad stock market as I can manage.

I have a couple of points here.  The first is that the I'm often concerned that the population at large isn't really aware of what's coming, and it's nice to know that we're not alone in thinking of this.  Tyler Durden, over at Zero Hedge reports that there have been 30 consecutive weeks of equity fund out-flows from the market.  It's encouraging to see people doing this to protect themselves from too much exposure to stocks.  Individual investors are shifting away from stocks. (chart from Zero Hedge) 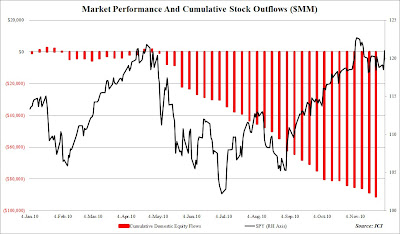 The second point is that the guys at the meeting never broached the subject of the role of the US dollar in all the life and death of the Euro.  CNBC reported a little while ago that the US is going to give more money to bail out the EU.  We have been bailing out the EU since 2008.  Again, thanks to Tyler at Zero Hedge:


One may be forgiven to believe that via its FX liquidity swap lines the Fed only bailed out foreign Central Banks, which in turn took the money and funded their own banks. It turns out that is only half the story: we now know the Fed also acted in a secondary bail out capacity, providing over $350 billion in short term funding exclusively to 35 foreign banks, of which the biggest beneficiaries were UBS, Dexia and BNP.  Since the funding provided was in the form of ultra-short maturity commercial paper it was essentially equivalent to cash funding.  In other words, between October 27, 2008 and August 6, 2009, the Fed spent $350 billion in taxpayer funds to save 35 foreign banks. And here people are wondering if the Fed will ever allow stocks to drop: it is now more than obvious that with all banks leveraging the equity exposure to the point where a market decline would likely start a Lehman-type domino, there is no way that the Brian Sack-led team of traders will allow stocks to drop ever... Until such time nature reasserts itself, the market collapses without GETCO or the PPT being able to catch it, and the Fed is finally wiped out in one way or another. 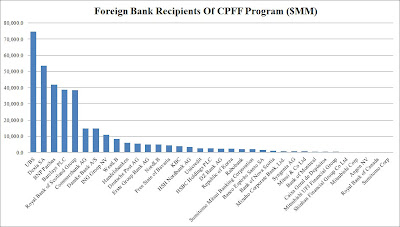 I realize a lot of people view Glenn Beck as more clown than news source, and I originally subscribed to his online site because I find him to be rather funny, but he has been telling a story for quite a while that the world's economies were linked in the 1960s as a form of Mutually Assured Economic Destruction.  The Euro and the dollar are so linked that if the collapse of the Euro doesn't bring the collapse of the dollar, it will weaken it so badly, almost anything will knock it the rest of the way over.  Ironically, the people who linked the economies said their plan was resistant to almost anything, except for a group of non-state actors, who wouldn't really be affected by the chaos and have nothing to lose.


Finally, on how well known this all is, the Lovely Secretary of the Homeland, Mrs. Graybeard recently placed an online order with one of the providers of long term storage food items, and got this response (in part):


With the announcement of QE2 on November 3rd, many of our customers became concerned about inflation in commodities prices, in particular food. As a result, we have experienced an unprecedented increase in sales that has continued until now. Because of this, many of our vendors have had a difficult time keeping up with the industry wide demand, especially for canned food storage.

So, yes, a lot of our neighbors seem to be waking up and bracing themselves for the storm that is coming onshore.
Posted by SiGraybeard at 8:53 PM