Now is The Winter of Our Discontent*

This is a winter of severe disruption around the world, as the old order edges further down the slippery slope, and chaos beckons.  Europe is burning, and I wonder how long until it hits our shores. 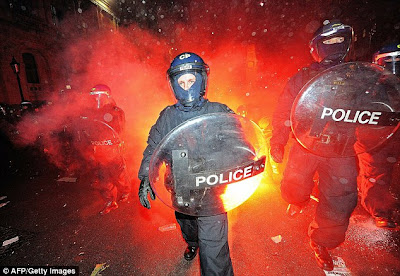 Today's college students in the UK grew up hearing stories from their parents about attending college for free, but that ended under John Major's administration in  the 1990s - when these students were children or before they were born.  These riots are supposedly the result of increasing college costs from 3000 to 9000 pounds (roughly $14,000) maximum.  It's also possible that the increase is justification for riots the left has been looking for an excuse to hold.

There is no doubt that there are groups trying to cause chaos and governmental collapse.  One of the hackers defending Wikileaks, for example, goes by the name of "Cold Blood" and says,


"We will fire at anything that tries to censor WikiLeaks." Really? Adding that the group wanted to be a, quote, "force for chaotic good."

"Chaotic Good"??  There is only one force at large in this world who thinks chaos is good.  I don't know what the kids call him these days, but he's known for throwing Jews into gas chambers, sowing killing fields in Cambodia, China and Siberia, shooting abortionists, and pretty much any instance you can name of coming to "steal, kill and destroy".  Does it not look like we are re-living this haunting work?

The Gods of the Copy Book Headings - Rudyard Kipling

AS I PASS through my incarnations in every age and race,
I make my proper prostrations to the Gods of the Market Place.
Peering through reverent fingers I watch them flourish and fall,
And the Gods of the Copybook Headings, I notice, outlast them all.

We were living in trees when they met us. They showed us each in turn
That Water would certainly wet us, as Fire would certainly burn:
But we found them lacking in Uplift, Vision and Breadth of Mind,
So we left them to teach the Gorillas while we followed the March of Mankind.

We moved as the Spirit listed. They never altered their pace,
Being neither cloud nor wind-borne like the Gods of the Market Place,
But they always caught up with our progress, and presently word would come
That a tribe had been wiped off its icefield, or the lights had gone out in Rome.

When the Cambrian measures were forming, They promised perpetual peace.
They swore, if we gave them our weapons, that the wars of the tribes would cease.
But when we disarmed They sold us and delivered us bound to our foe,
And the Gods of the Copybook Headings said: "Stick to the Devil you know."

On the first Feminian Sandstones we were promised the Fuller Life
(Which started by loving our neighbour and ended by loving his wife)
Till our women had no more children and the men lost reason and faith,
And the Gods of the Copybook Headings said: "The Wages of Sin is Death."

In the Carboniferous Epoch we were promised abundance for all,
By robbing selected Peter to pay for collective Paul;
But, though we had plenty of money, there was nothing our money could buy,
And the Gods of the Copybook Headings said: "If you don't work you die."

Then the Gods of the Market tumbled, and their smooth-tongued wizards withdrew
And the hearts of the meanest were humbled and began to believe it was true
That All is not Gold that Glitters, and Two and Two make Four
And the Gods of the Copybook Headings limped up to explain it once more.

As it will be in the future, it was at the birth of Man
There are only four things certain since Social Progress began.
That the Dog returns to his Vomit and the Sow returns to her Mire,
And the burnt Fool's bandaged finger goes wabbling back to the Fire;


* confidential to any dweebs who studied Shakespeare or Literary Criticism in general: yeah, I understand that's not what the famous quote is really saying.  It was saying the bad winter was over, not starting: "Now is the winter of our discontent, Made glorious summer by this son of York".
Posted by SiGraybeard at 10:58 PM