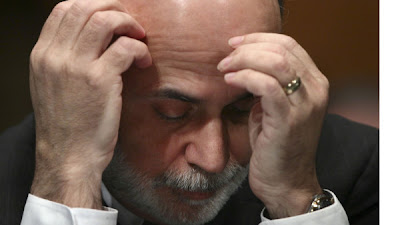 I've never had a headline of the day, but Junior Deputy Accountant wins the Interwebs with "Bernanke on 60 Minutes: I Did Not Have Sexual Relations With That Free Money",  wherein we learn that Ben is 100% confident that he can prevent runaway inflation.  He insists that the economy is in bigger danger of deflation and that inflation is under 2%.

Srsly.  You just have to wonder about a guy who reads his econometric data and doesn't cross check it with the real world.  Inflation is here.  Ben - go grocery shopping.  Buy your own gasoline.  Pay a bill.  Inflation is here now.  I've written on this many times, as have many others.

"The Bernank" and the other central bankers around the world have failed at every step of the way because they're using bad theory.  Dumping money into a broken system just makes it a broken system with lots of money in it.  It is already causing inflation, and exporting inflation to China - which isn't going over well.  Governments can't resist the lure of money that doesn't have to be limited by some scarce commodity (think gold).  They always want more money: to buy votes, or to go on foreign adventures.  If you're limited to a standard, you have to be disciplined.

Oh, and they're not "printing money".  They're not going to affect the monetary supply.  They're just buying Treasuries with their own money, that's all. Must see TV:


Now let me go off into my own wild, crazy idea.  I believe that Ben, at the behest of Fed.gov, is deliberately crashing the dollar - to correct our trade imbalance with China.  We have pestered China to not peg their currency to ours and let it float up in value, as it should.  They have told us where to stick that.  So if we can't raise their currency, we can crash ours.  Sort of a giant game of chicken to see who gives up first.
Posted by SiGraybeard at 8:04 PM