Tales From the Police State

Apparently underage drinking is such a threat that officers need to hop on hood of a car, point guns at college aged girls and break their car windows.  For buying bottled water.


A group of state Alcoholic Beverage Control agents clad in plainclothes approached her, suspecting the blue carton of LaCroix sparkling water to be a 12-pack of beer. Police say one of the agents jumped on the hood of her car. She says one drew a gun. Unsure of who they were, Daly tried to flee the darkened parking lot.

"They were showing unidentifiable badges after they approached us, but we became frightened, as they were not in anything close to a uniform," she recalled Thursday in a written account of the April 11 incident.

The state Alcoholic Beverage Control is reviewing the case - anyone want to bet the agents will be chastised for being a bit too "authoritah complex"?   No, I didn't think so.

The two sides tell completely different stories.  The two girls were stopped by someone showing badges, according to the ABC spokesdroid.  The girls, meanwhile, said, “They were showing unidentifiable badges after they approached us, but we became frightened, as they were not in anything close to a uniform,”.  Fresh from watching a campus program to sensitize them to the dangers of rape,


The woman was on edge after spending the night listening to stories from dozens of sexual assault survivors at an annual "Take Back the Night" vigil on Grounds, said Daly's defense attorney, Francis Lawrence.

Sounds like the "Take Back the Night" vigil did a good job of making the girls think anyone who might talk to them is intending to rape them.

The whole thing seems to be a horrific misunderstanding.  The agents horribly overreacted - I mean, if two 20 year olds had a case of beer instead of bottled water, so what?  Does it really warrant that sort of reaction?  Talk about a crime by definition rather than something that's truly wrong... The girls, for their part, say they were going to drive to a police station: they wanted the flashing blue lights and the uniforms!  They dialed 911 and stopped when a patrol car showed up.  The whole incident happened because the plain clothes officers freaked out the girls, and when the girls reacted, the officers overreacted.  Culturally, police will never want to allow someone to walk away.  It's surprising things like this don't happen more often.

No matter what, it still doesn't justify hopping on the car, pulling guns on the girls and trying to break into their SUV.  If they had been running out of a bank, alarms ringing, carrying bags of cash - yeah, sure.  For college age women walking out of a store with something they bought - never.  Never. 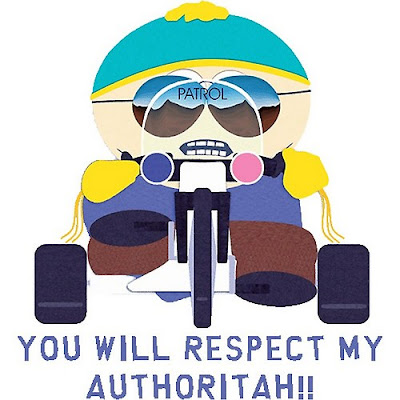 In the eyes of far too many in that uniform, though, there are only two kinds of people in the world: cops and perps.  They're not about to let someone react the way these girls did.  Hopefully, state prosecutors will have some more sense.