Irma taught me a few lessons that I think might be useful to more people than just me.  Some things worked exceptionally well, others not so much.  Times like these where a total reliance on your SHTF plans is when weaknesses can be exposed.  This didn't happen in Matthew last year, but with Irma, a massive hole in our plans was exposed.

Let me lead with our biggest lesson.  I'll phrase it like most of us learned it as kids.

Don't put all your eggs in one basket.
There's a more modern, more up to date, more tactical version of that common wisdom, "two is one and one is none".  Same idea.

In our case, the "eggs in one basket" was that we weren't going to lose electricity long term because we have a LNG-powered whole-house backup generator.  That belief colored everything we did.  As the power went out on Sunday night while the storm was building, the generator fired up and came on as it has done a few times in the past.  All seemed normal.  Monday morning, while we were still under steady 25 mph winds with gusts to about 40, we had a knock on the door.  It was the fire department.  Someone had called to report a gas leak, and they found our generator.  They told us it was blowing raw fuel in the exhaust and to turn it off.   The SW winds were in position to blow the fumes away from the house and I would have never smelled it.

I called the company that had done the installation and the owner came out within a few hours.  He said it was blowing more fuel than it should, but said, "if it was me, I'd be running it", after telling me he really can't say that for liability reasons.  That left me in a quandary, though, of "should I run it or will my neighbor call out the fire department again?"  We opted not to run it, except for an hour a day to try to keep the food in the freezer frozen.

This is another issue.  I see people talking about running their small generator just a few hours a day to keep the refrigerator cold.  I have a remote reading thermometer that I can put in the refrigerators and none of them will cool off in a couple of hours a day.  Is the issue that the modern, high-energy efficiency refrigerators get their efficiency by sacrificing peak cooling capacity?  It seems possible to me.  Maybe if we had a generator on one hour, off one hour all day, or on one/off two, that would work.  A hidden drawback of "all the eggs in one basket" is that we have a big freezer and buy some frozen foods for months ahead of time because we're sure we're not going to lose electricity long term.  We stand to lose a lot more money's worth of food without that power.

Important background info.  In July, we received a letter from Generac telling us that there was a potential problem in the generator, the fuel plenum that might have rust damage and it cause this exact failure mode - I've since learned the plenum is essentially a buffer that provides a surge of fuel when the generator gets a load surge.  The letter said to schedule an inspection for a typical cost of $80, and if the plenum is bad, they'll provide the replacement and reimburse the $80.  With the eclipse trip coming and a few other things in life, we said we'd schedule the inspection when we got home, and promptly forgot to get it done immediately.  The tech who installed the plenum just left a little while ago, but our power came on last night about an hour short of 48 hours being out.  Internet and cable came back after that.

The problem isn't really going without electricity.  Yeah, it sucks, but we had some ways around that.  We have several batteries (things like these or these are very useful) that can act as backups, a small solar panel to charge the big one, and keep some things charged, but nothing that would keep our freezer or refrigerators going because we had assumed the generator would be there.  In other words, I was blind to that weak spot. 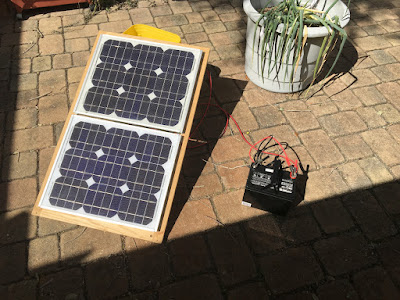 I'll return to that concept.

Having a barely-working generator, we relied on batteries.  The next tweak we could do to our preps would be to have fans that run a quieter.  We have a camping fan but it was loud for trying to sleep next to.  I have a 500 Watt inverter for that large 12V battery on the solar cells.  It will power things on 120V with about a 20% energy penalty (I assume the inverter is 80% efficient; I haven't really measured it).  It also has a fan that's a bit loud.  These are relatively minor annoyances.  Getting a fan that won't deplete 8 D cells or one of the jump starter/cell phone charger batteries overnight is a really good idea.

There were positive lessons, too.  What worked well?

Until Hurricane Erin in 1995, we basically had no preps.  Not even plywood and concrete nails.  We put in a system based on the POMA components that can be bought at Home Depot.  These are corrugated aluminum panels that are very impact resistant, held to the wall with permanent anchors in the concrete and 1/4-20 stainless hardware.  It takes a few minutes per window to put them up and when taken down, the stack easily fits in one corner of the garage.  Each panel is 15" wide, but with varying heights, so they stack in that width, and front to back take up no more than a couple of feet.

We also added a "hurricane rated" garage door, although I think it's only rated to the bottom of Cat 3, 115mph.  I reinforce it from the inside to try to offset the forces of it pressing in.

LED lights, in particular these, are great.  There might be a similar product from someone else, but they work as an area light or handheld.  Several levels of brightness and I never used the highest. 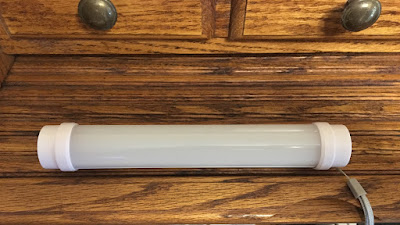 The whole concept of having the solar panel to charge my 35 AH battery so that it can run things overnight or longer worked out.  If the sun is bright, we can charge the battery at close to a 2A rate, but using it for more than about 12 AH of energy means there's barely one charge/discharge cycle per day.  I think I need to scale the system up.

Cooking was trivial.  There was no need for a propane stove or to use the charcoal grills.  Our LNG range has a piezoelectric ignition so that when we turn on the gas, it lights without a pilot light.  When the electricity is out, all we need to do is hold a match or lighter near the burner and ease the gas on.  When we partitioned our energy to run some things on gas and others on electricity, we gained that.  Hot water for dishes or showers or other uses, unfortunately, needed electricity to control the tankless (LNG) water heater.

At the risk of overstating the obvious, it became painfully obvious that the quality of life in the aftermath of the storm was determined by the available energy.  Electricity or gas, without some energy source, we're quickly returned to bare bones primitive life.  You can store that energy as big tanks of diesel, gasoline or propane, a liquefied natural gas (LNG) pipe (like we have for some of it) or electric energy in massive battery arrays.  Batteries have the specific energy disadvantage I've talked about before in the context of electric cars; basically, while an internal combustion engine uses a fuel tank and gets its oxidizer from the air, a battery has to provide its own oxidizer.  In the house, that turns into several square feet of some room to store the batteries.  In terms of the machinery to make life comfy, all machines break; all plans go sideways.  Spares are always good.  If not mandatory.

It's always reasonable to think of what can be improved, and my inclination is to get something that would power the most critical infrastructure: the freezer, the refrigerator, should the main generator not be available.  Perhaps add in a few lights and a small room unit air conditioner.  All of that could be accomplished in the metal shop, where I have a small Mini-Split air conditioner.  The question of how it's powered is up in the air.  Cover the south facing areas of my roof in solar cells or store some fuel with those attendant problems?

Posted by SiGraybeard at 2:49 PM

Labels: life, Me, the big picture