Short Demo of my Logitech Rumblepad 2 Control for the G0704

I debated putting a long script together to narrate this, but didn't.  It ends up being kind of long.


Instead, a short demo.  The Rumblepad has a set of numbered buttons on the right. 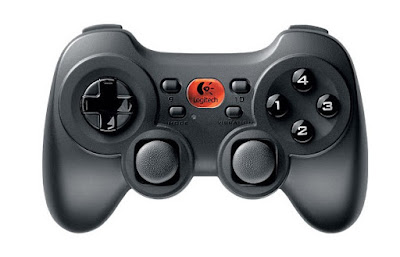 I used the physical layout of the buttons to choose directions: 1 moves the X axis to negative numbers, while 3 moves the X axis to positive numbers.  Likewise, 2 Y axis to negative numbers , 4 is Y axis to positive numbers.  I use the 4-way rocker switch to control the rotary, A, axis.  Up is clockwise, down is counterclockwise.  The buttons visible in profile at the top, one over each of those controls are really two buttons vertically.  One is Z-axis up the other Z-axis down (both the left and right button pairs are the same).  (If you're easily confused, don't read the rest of this paragraph.  The mill operates backwards from that: the tool is stationary and the table moves opposite to what you think.  When I press the right arrow, the table moves to the left, but the relative motion of the cutter is to the right).

The game controller uses a wireless connection; I haven't looked for it on a spectrum analyzer, but I understand it uses the 900 MHz "Part 15" frequencies.  Since the Rumblepad has been around a long time, it has Windows drivers.  I was just able to plug the "base station" part into the USB port on my Win7 shop computer and have it recognize the hardware and load the drivers.  Mach 3 comes with a utility called Keygrabber that recognized it as a Human Interface Device (HID).  When I press a button, say the 1 key, Keygrabber highlights what I pressed and says it's not assigned.  Double click on that line and it offers you the option to either tap a key on the keyboard or pull up a menu and choose one of those selections.  In this case, I pressed the left cursor arrow key on my keyboard, and it assigned it to that action.

Making the video and playing with this today was just my way of dealing with the intractable boredom of waiting for the storm.  With all the preps in place, there's nothing else to do.

Hope this is useful to someone!