Tesla CEO Elon Musk has famously been pushing for "auto pilot" and fully autonomous cars, saying in October of 2016 that all new Teslas would have self-driving capabilities.  I've been covering some of the autopilot crashes of those self-driving cars as data comes around.  By that I mean that I don't hang out on Tesla user's groups looking for stories of accidents.  On the other hand, the technology needs to get some light focused on it.  It's not ready for Prime Time and Tesla finally seems to be acknowledging that.

This week, Design News presented an article with a few "fun facts" that indicate US consumers are really skeptical about autonomous cars.  First, a Gartner's Survey shows that 55% of respondents would not ride in an autonomous car.

It turns out people seem to have taken lessons from things like the Equifax data breach - along with so many others - to heart and are concerned about security along with the general category of "technology failures".


A new report from AAA reveals that the majority of U.S. drivers seek autonomous technologies in their next vehicle, but they continue to fear the fully self-driving car. Despite the prospect that autonomous vehicles will be safer, more efficient and more convenient than their human-driven counterparts, three-quarters of U.S. drivers report feeling afraid to ride in a self-driving car, and only 10 percent report that they’d actually feel safer sharing the roads with driverless vehicles.

Three-quarters of drivers are afraid to ride in a self-driving car?  That's quite a bit more than the 55% Gartner found, but those numbers are more like each other than not.  There's a lot of anxiousness about the technology.  Still, AAA reports that while the majority are afraid to ride in a fully self-driving vehicle, the survey also found that a bigger majority (59%) wants to have autonomous features in their next vehicle.  This apparent contradiction suggests that drivers are ready to embrace autonomous technology, but they are not yet ready to give up full control.  People are responding with a skeptical "prove to me it works" attitude.

I wasn't aware of the impact at Tesla itself until the Design News article.  Summarized in Inc. Magazine,


Musk's fervent vision of a driverless world repeatedly clashed with his team's view on the progress of the technology. The dispute led Sterling Anderson, then Autopilot director, to resign just two months after the October announcement. Since his departure, at least 10 other engineers and four top managers -- including Chris Lattner, who had been selected as Anderson's replacement and lasted just six months on the job -- have also left.

This isn't the first time dissent among Tesla engineers has been reported. In July 2016, after a fatal crash killed a driver using the Autopilot function, CNN reported that several employees tried to warn Musk about the reliability of the technology, and that it wasn't ready to be deployed to consumers.

The team working on Tesla's Autopilot feature felt uneasy about marketing the technology as "fully autonomous."  They felt they didn't yet have a product that could "safely and reliably control a car without human intervention."  In other words, they felt like the 55 or 79% of consumers surveyed who didn't want to trust their lives to the self-driving cars.

This is called engineering ethics.  We're always required to voice our opinions and point out unsafe or improper things.  At some point, if the company doesn't respond, the only ethical thing left is to quit. 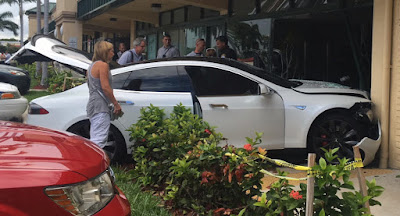 The driver of this Tesla says that when she was parking in front of her gym, it jumped into high acceleration, jumped the curb and hit the wall.  Tesla flatly says "nope", their monitors say she stepped on the gas.  Could be.  Hey - it's not your typical Tesla picture, that's all I was looking for.