NASA received its last data transmission from the Cassini spacecraft at 4:55:46 a.m. PDT (7:55:46 a.m. EDT, 1146 GMT) today (Sept. 15), before losing contact with the probe as it hurtled into Saturn's atmosphere. It was a fiery grand finale  for the probe, which spent 13 years orbiting the ringed planet. NASA officials expect that Cassini broke apart about 45 seconds after that final transmission, due to the intense friction and heat generated by the fall.

Properly called the Cassini-Huygens mission, the probe was a joint venture of NASA, the European Space Agency, and the Italian Space Agency.  It was launched in 1997 and arrived at the Saturn system in 2004. In 2005, the Huygens lander dropped onto the surface of Saturn's largest moon, Titan, revealing the hidden world beneath its opaque, orange atmosphere.  The Huygens lander detected lakes and seas of liquid hydrocarbons such as methane, ethane, propane and some heavier compounds on Titan.  Liquid methane boils to the more familiar (here!) gas at −161.49 °C or −258.68 °F. , so that gives you a perspective on just how cold it is there.  The temperature at the landing site was 93.8 K (−179.3 °C; −290.8 °F).

The Cassini orbiter's initial mission was meant to last until 2008 but was extended twice, stretching the spacecraft's life to 2017. 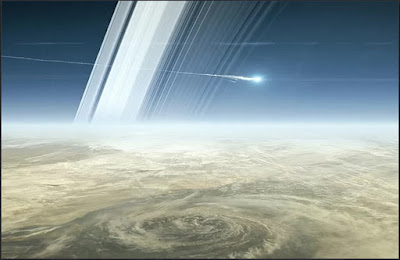 Artist's image of Cassini as it burns and breaks up during entry into Saturn's atmosphere.

There are some "best of" pictures at MSN Look at those at full size. If you know the mission, many of them will be familiar.

As an aside, a month ago, I did a piece on Voyagers 1 and 2, the first man-made objects to leave our solar system. I mentioned a PBS special that was going to air on September 23, The Farthest. That was the night we got home from our trip to see the eclipse, and I set the DVR to record it.  It's worth watching if you haven't seen it.  Was it everything I'd have liked them to cover?  No.  It was short of some of the important techie details and long on details about the album the Voyagers carry with recordings of music and voices from Earth.  Too artsy for me.  Like I always say, when the typical commentator talks about diversity, they mean people of different ethnicities or colors.  Real diversity is putting engineers and artists together.  I've met enough of all of them to know I have far more in common with black, Asian or Indian engineers than I do with any dancer I've ever met.