If Only They'd Promise to Shut Up

Courtesy of a link on Watts Up With That, we learn that experts at the World Economic Forum say we have three years left to save the planet from the worst damages of climate change.  Now why experts at an Economic forum should know anything about climate change is another question entirely.

If only they'd promise to shut up in three years, it would be worth whatever mythical disaster would happen from not doing anything.  The thing is, they'll never shut up.  After 3 years we'd get them saying, "see I told you so" for the next hundred years.

The rest of the article is bullshit, full of predictable demands that wealth be transferred to "Holy Green" industries, green causes, and other connected people making it hard not to think the three year number is bullshit, too.


A planet devastated by climate change may seem like a distant future. But Earth is already experiencing effects today.

Globally, the mean rate of sea level rise increased 50% in the last two decades. In 2017, temperatures have already reached their highest levels in history in some areas, from California to Vietnam. And the past three years were the hottest on record.

The problem is that every single one of those points has been contradicted by other studies.  It's not the clear cut picture they portray.  The acceleration of sea level rise has been disputed or disproven, and the other points are covered by the most important contradiction: the study that showed when temperature adjustments are removed, nearly all warming goes away.  Actually, that's only one such study.  There have been others.  If the temperature record can't be trusted how do we know if California and Vietnam have really had their hottest temperatures?  Prince Charles updated his 2009 claim that “we have 100 months to save the world” after about 72 of those 100 months saying in 2015 that the deadline is 35 years out.  I'd say they should get their stories together, but inconsistency seems to be pretty common in the alarmist's world. 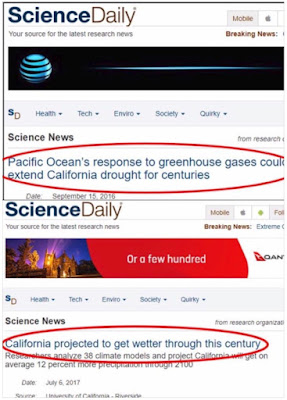 It can't get wetter and have a centuries long drought at the same time.  Pick one.