It's A Really Poopy Night

The day wasn't that bad, but as the evening approaches and Irma moves north over the inland west coast, it's getting pretty nasty out.  Winds are around 45 gusting 60-65 and we've had about 2" of rain in the last 24 hours.  There have been tornado warnings every half hour or so, and one tore up a mobile home park about 15 miles south of us.

The major development for Beast Irma has been a continued weakening, and a continued tendency to track toward the right of the expected path.  This is good for McThag and lots of people in the central and western parts of the state.  The weakening has been from dry air from the NW wrapping into the core.  Nothing kills a hurricane faster than cool, dry air. This is a NOAA satellite water vapor image of the dry air intrusion wrapping into the center.  I think you can make an argument that Irma has started the process of going "extra-tropical" which will turn it into a stormy low pressure system over the Illinois/Indiana/Kentucky region by Tuesday. 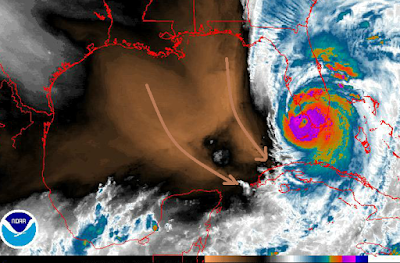 I've had to do battle with a fence gate that kept opening, and eventually drove a piece of angle aluminum into the ground to (hopefully) keep it from blowing off its hinges (we hired a fence company and they didn't do a good job with this gate).  Count three trips across the backyard in foul weather gear getting those 50 mph winds in the face.  This gate is a regular a source of problems.  I wouldn't be in the least surprised to come out at daybreak and find the fence down.

Got this picture in the mail and it's a striking composite radar image. 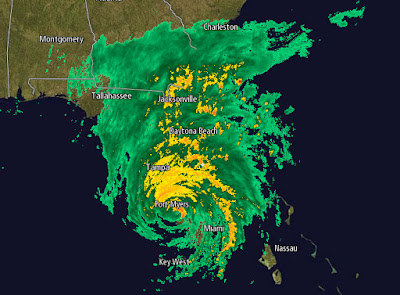 The cloud cover is bigger than the entire state, about 500 miles from Key West to the Georgia border just north of Jacksonville.  The southern half of the storm is drying out and the radar is not showing much rain in that area.  Compare that to this cloud cover composite that's making the rounds. 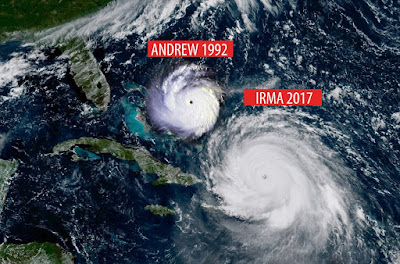 We're in the worst 12 hours of it for central Florida.

Edit to add the power just went out and our generator is on.

Posted by SiGraybeard at 8:18 PM