Another "You Can't Make This Up" Story

The University of Mississippi is starting their new school term and like universities across the country, Ole Miss is flush with new freshman, junior college transfers and people changing colleges.   As part of the rituals of starting a new year, the college had planned a "Greek Life Retreat"; a weekend for the fraternity/sorority system.  And then horror struck and in response to terrified students the retreat had to be cancelled.

Someone threw a banana peel into a tree.  Seriously.  I'm not making this up.


The University of Mississippi cut short a fraternity retreat this weekend when a participant threw a banana peel into a tree, which was perceived by some students as a racist act, the Daily Mississippian reported.

A male student, Ryan Swanson, said that he tossed the peel into a tree near one of the cabins because he couldn't find a trash can.  It's just going to rot away and turn into plant fertilizer, right?  I don't know about you, but banana peels seem to me to be so recyclable that they're turning brown and decomposing almost before you've finished eating the banana.  How much harm could a banana peel cause?

But that's not thinking of the terrible psychological damage a banana peel can inflict.


Makala McNeil, president of Alpha Kappa Alpha and one of the students who happened upon the peel, told the student paper, "You see how much fear and how much anger you incite in black people just from an unintentional image."

In May, bananas were found hanging from noose-like ropes in three areas around the American University campus, some marked with AKA—for Alpha Kappa Alpha—and with the word "Harambe," the name of the gorilla who was shot in an Ohio zoo last year. In September 2016, a black student at American reported that white students put boxes of rotten bananas outside her dorm room.

The university is in full recovery mode, acting all melodramatic about the threat of one banana peel.


Katrina Caldwell, vice chancellor for diversity and community engagement, said her office was asked to put a plan together to handle the weekend’s incident on campus.

“Right now, we’re just talking to people on campus who have some experience working across diversity to help the students process what happened,” Caldwell said.

Caldwell said she needs to talk with a couple more faculty members before deciding “what makes the most sense” for the campus.

I know I've said it to people in meatspace, but I'm not sure I've ever said it here so here goes: there isn't a week that goes by without some story that makes me say, "the world has gone totally, completely FN".  Week?  It's virtually every day. 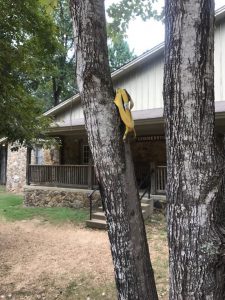 The alleged Banana Peel of Doom, from the Daily Mississippian.

Listen, there's a lot that could be said here; acres of text parodying the hypersensitive college kids, safe spaces, rooms to snuggle with puppies, all of it.  The thing is, the kids are self-parodying.  I don't have to say a thing other than to point out that a weekend of college life was totally upended and destroyed over One Single Banana peel.  Nothing real happened, just a banana peel was flipped into a tree.  Everything else is imaginary.

God help us all.  And especially, God help anyone who has to hire recent college grads.

Posted by SiGraybeard at 8:08 PM