A few weeks ago, I said there's no debt ceiling.  Just ignore the hype coming out of DC and know that you can absolutely count on them not being grownups, not showing any fiscal restraint and eventually raising the debt ceiling.  There has been a legal debt ceiling since 1917 and they've never not raised it before, so why should we expect that with the fractured mess we have in DC now that they'd suddenly grow up now?

As predictably as the coming sunrise, a deal to increase the debt ceiling was reached; the only novelty being that this time the president dealt directly with the Evil Party instead of the traitorous members of his own party.  (As an aside, while we decry Mitch McConnell for being spineless and the Stupid Party for being unable or unwilling to do anything they ran on doing, you have to credit Chuckie Schumer for being, perhaps, the most effective senator on the hill, simply for the amount of time he gets his way).  As they've done before, the Treasury Department magically slowed the rate of debt increase by special means, the rest of us call that "lying", and then on last Friday the national debt suddenly and equally magically increased $318 Billion in One Freaking Day, so that now we're well over the $20 Trillion National Debt level. 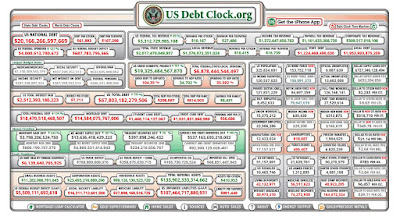 “Yeah, we need to cut spending, but we can't do it now!  We need to provide relief for those Hurricane Harvey victims in Texas!  It's different this time, not a regular debt ceiling!”  Don't worry, though, there will be something else next time to prevent the discipline.  Don't we remember Pelosi saying there's nothing left to cut in the budget?  The fact is that they'll never cut the budget.  It just ain't happening.  There are far too many people and groups who depend on that flow of money - and those people and groups funnel money to the ruling class to perpetuate the system.

Over a dozen years ago, Dick Cheney famously said, “Deficits don’t matter.”  In the short term, that might be true.  Seed corn wouldn't matter if you knew there'd never be another tomorrow.  Hungry?  Eat the seed corn.  If there was no tomorrow, there'd be no reason not order a few extra desserts, no reason not to have a few more drinks, no reason not do just about anything.  But there is a tomorrow.  You need to plant the seed corn so you can eat next year.  You might find the extra drinks lead to a hell of a hangover.