From the Nanny Madness of the UK, a proposal to put "food quality" scores on grocery receipts.


Well, a new proposal says the “traffic lights” system – widely adopted on food and drink packaging since 2013 – should be migrated from individual items to entire receipts. Forget the problem of making it through checkout without impulse-buying three bags of bonbons and a copy of Heat! magazine; now it is about the half-price pizza catapulting your basket into “red” territory.

“Instinctively, it seems like a good idea,” says Ed Morrow, campaigns manager at the Royal Society for Public Health. “If health information is just on the product, it’s easy to ignore, but if you get another reminder at the till you might start to compare receipts, see what you’ve scored each time, then try to do better. Doing things that gamify the experience of shopping can be a good motivator in terms of changing behaviour.” That is if you want your midweek trip to Tesco to be gamified: is this just 21st-century code for the nanny state? “It’s not telling people what to do,” Morrow says. “All it does is provide people with extra information.”

Sheer madness.  Let's start with the knowledge that there's no evidence that forcing restaurants to put calorie counts and nutrition summaries on menus does anything.  In fact, the evidence is that the requirement to post nutrition counts makes work for restaurants and raises prices but consumers don't care.  Now let's extrapolate to the grocery receipt.  This is based on the assumption that what the buyer bought is eaten between grocery store trips as it came from the store, and not prepared into meals combined with other things they already have or buy elsewhere.  The buyer could just as well be feeding friends, donating food, or storing it so that it's eaten over a longer length of time or at some time in the future.  All of the nutritional guidelines are based on consuming a mix of foods in meals and the quality of the meal is based on comparison to standard daily intakes of some amount of food.  There is simply no way to get that from a grocery list, unless everything that person buys is  precooked meals from that store and that's all they ever eat.

Let's go with a simple example.  Someone buys some food that the food police code as red.  Then they go to another shop and buy other things coded green to make a meal that changes the nutritional data completely.  The article states it's likely to be accurate in the long run, but I don't see how.  Averaging bad data doesn't make it good data.  It just makes a bad average. 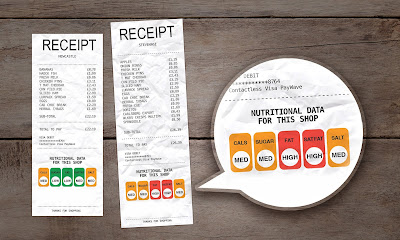 Mrs. Graybeard and I have a running joke that the purpose of buying celery is to put it in the refrigerator until it gets limp and has to be thrown out.  That's an exaggeration, of course (exaggeration is the essence of humor), but we honestly think we've thrown away more celery than we've eaten.  That's a way to bias the data, too.

Nutrition codes on a grocery receipt are meaningless information that aren't going to affect anything, are based on several faulty premises, and will create costs that the poor customers are going to have to pay for - so that they can ignore it.


“What would be really interesting is if the retailers link it to algorithms set up for loyalty cards for those who want it,” says Taylor. “So, if a till receipt shows lots of reds, you might get vouchers to buy more veg. That’s when it could start to get really powerful. But let’s be clear: the whole food system has to work harder to make the easiest choices the healthy choices. That’s what needs to change.”

No, Ms. Taylor.  What needs to change is you.  You need to go away.