Post-Harvey and Post-Eclipse Problems - Another View

By now, pretty much everyone has read about the massive traffic jams between South Carolina and Atlanta like Denninger posted.  I've spoken with other people who went through that and had the same perspectives as he posted.

My experience was rather different.  First, I didn't go to South Carolina, which was the "easy" trip from Atlanta and much of the southeast.  I expected that route to be crowded, with a high chance of being clouded out, so I ruled it out.  Never expect any trip to take the amount of time that mapping programs say and always be prepared for a worst case.  The most direct path for me went through Atlanta and in all the times I've taken through the Atlanta area on I-75 I've only had it go smoothly once, and that was about 9AM on a Saturday.  Not in the cards for this trip.  I think that the infrastructure around any big city is simply inadequate for the traffic.

Because of that, I arranged my trip assuming it would take two days of driving.  As we've done in the past, we scheduled to stop once we got past Atlanta - going up and back.  On the way up, we stopped in Woodstock, GA, which is pretty much an Atlanta suburb but north of the bypass loop; we stopped that close because I have a friend there and we thought we could visit - but he ended up being out of town.  On the way south, we stopped at Valdosta, GA.  In both cases, the mapping programs indicate about 8 hours of driving and it took about 9 to 9-1/2 hours with most of the rest around Atlanta.  On the way south, we could have stopped a bit north of Valdosta, perhaps Macon, to make the days more equal in drive time, but that's a minor tweak.

For this trip, we "auditioned" a mapping app we haven't used before, Waze.  The feature they base themselves on is community edits, but the problem with that is there is usually isn't a way around the problems.  We still had a long delay on the way up (near Ocala, Florida, of all places) and on the way home, it routed us far west of Atlanta on country backroads, for no apparent reason.  In the first case, there was simply no exit off the interstate to run in the same direction and get around the mess.  By the time you could do that, you'd do better to just stay in the traffic crawl.  On the way home, we assumed it was to route us around something that had been present hours before when we set up the route.

Yes, we had a bug out bag in the backseat, along with gallons of water for the cooling system, tools to make expedient repairs on the car, water to drink, and necessities for hoofing it.

Post-Harvey, my dominant thought was the one I often have: I don't understand how people who live in a hurricane zone don't always have preparations in place to be without power or water or both for a few weeks.  Still, even if the house was surrounded with sandbags, in a flood this epic, you're getting forced out of the house.  DON'T GO IN YOUR ATTIC UNLESS YOU HAVE A WAY OUT.  It's a death trap.  We could talk about not living on a flood plain but that's pointless if you're already there.  And while I'm on the topic, the statistics of something being "a thousand year flood" don't preclude that you could have two in a row, in a short time; it just means that if the statistics are correct, you can say the probability of that happening is low.  Saying the chance of it happening twice in a row is one in a million says it's not very likely, but as Powerball proves, very improbable things happen all the time.

I have a feeling that the National Flood Insurance Program is going to experience some modifications in the light of Harvey.  They already say the program is "underwater" (with no apparent sense of irony), but when something this terrible is on TV 24 hours a day, it's the reflex of congress critters to throw money at it.  I would love to see the program shut down and let the insurance market work it out, but with only one political party in Washington, I'm afraid I don't see that happening.

Gasoline production has been cut about 20%; the shortages we see now are the result of panic buying.  The industry is trying to get those refineries back online as we talk.  Might I suggest that when supply is reduced 20%, if demand went down 20% there's no problem?  While gasoline demand isn't extremely elastic, there is some.  Simply cut down your use of gas to the extent possible.  If everyone could cut their use by 20% there would be no problem.  I know that for many people, cutting their use by 20% isn't an option because their driving is commuting for work.  Those of us that can reduce our driving should do so.  The supply system is coming back online and this shortage could be over quickly, perhaps within a week. 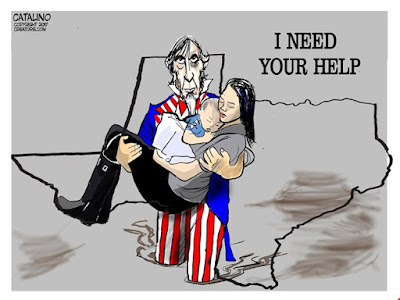 Posted by SiGraybeard at 2:12 PM