US Navy to Use X-Box Controllers on Most Advanced Subs

It's safe to say that only a very tiny portion of the population has actually been in a modern submarine so what we think we know is heavily influenced by Hollywood.  Depending on your age, your first thought is probably either something with tons of analog gauges and dials from vintage movies, or something with computer monitors from a more recent flick.  The fast attack submarine USS John Warner is called "the Most Advanced" submarine in the fleet, and is filled with sophisticated computers with flat-screen monitors to replace much of the conventional instruments and gauges. In those old submarines movies, the periscope was a single optical tube that would be raised above the surface so that a submerged submarine could get a look around.  One man at a time could look.  In the John Warner, those days are gone:


It's been replaced with two photonics masts that rotate 360 degrees. They feature high-resolution cameras whose images are displayed on large monitors that everyone in the control room can see. There's no barrel to peer through anymore; everything is controlled with a helicopter-style stick. But that stick isn't so popular.

The stick is a system designed by defense giant Lockheed Martin - LockMart, as we call them - and it's a $38,000 box.


"The Navy got together and they asked a bunch of J.O.s and junior guys, 'What can we do to make your life better?' " said Lt. j.g. Kyle Leonard, the USS John Warner's assistant weapons officer, referring to junior officers and sailors. "And one of the things that came out is the controls for the scope. It's kind of clunky in your hand; it's real heavy."

The solution?  A video game controller, Microsoft's X-Box controller, something very similar to the Logitech Rumblepad that I just added to my CNC milling machine.


The Xbox controller is no different than the ones a lot of crew members grew up playing with. Lockheed Martin says the sailors who tested the controller at its lab were intuitively able to figure out how to use it on their own within minutes, compared to hours of training required for the joystick.

The Xbox controller also is significantly cheaper. The company says the photonic mast hand grip and imaging control panel that cost about $38,000 can now be replaced with an Xbox controller that typically costs less than $30. 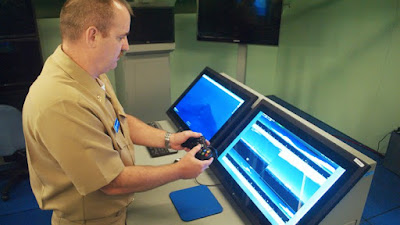 The crew, after all, is primarily young men who grew up in a digital world playing video games. What could be more natural than a game controller? 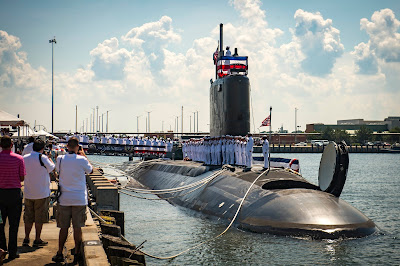 The John Warner at her public commissioning ceremony.  Wikimedia photo.


The Navy says that the system has gone through extensive testing over the past two years and that the Xbox controller will be included as part of the integrated imaging system for Virginia-class subs beginning with the future USS Colorado, which is supposed to be commissioned by November.

Just a nifty little story.  Caught my eye because of the similarity to the hardware I've just started using.