Much like Miguel down at Gunfree Zone, it looks like Irma's going to pay us a visit.  The track really hasn't changed in a few days.  The various model runs drift left and right, but that's just the inherent inaccuracy of such things. 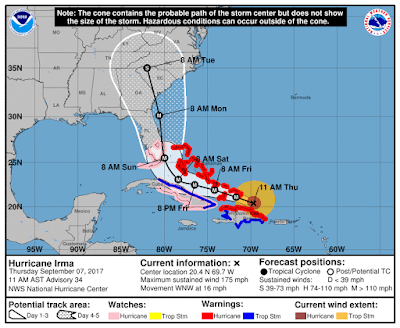 The projected path crossing the state near Cape Canaveral (the bump midway down Florida's east coast) has been there for at least a day.  I'm a little south of the Cape.  No, we're still not in the white zone (3 day forecast) but we started putting up shutters this morning.  We started a bit too late after too much time dawdling over coffee so we'll finish either later this afternoon, if we get some clouds, or tomorrow morning.  I'll get up and out earlier.

There's a saying that goes "prepare for the worst;  hope for the best" and that's where we are.  In aftermath of the first two big storms of the '04 season, Charley and Frances, the state emergency management folks were saying, "if you don't need to evacuate, just hunker down in place" to ride out the storm.  We live in a well-built house.  For example, one of the most critical things is that the roof is held down with fasteners and not just be held on the house by its own weight.  Our house was built that way, embodied in the post-Andrew building codes, despite being built 15 years before it was required.  Our addition, built in '14, is built that way, and includes storm windows rated to cat 5.

That said, if yesterday's Irma came onshore with 185 mph winds, I don't think anything in the county that would go unscathed.  Maybe the old blast proof blockhouses on the Cape, except they'd probably flood.  There's just no reason to think we'll get a storm that strong.

Aside from fewer options for getting out of the house, life as normal until Saturday evening.

Posted by SiGraybeard at 2:38 PM