Self-driving or automated-driving-system (ADS) cars are a regular topic that has consumed a lot of bits here.  (All of my bits are 100% recycled; no electrons are harmed during the composition, posting or reading of a post - although I suspect some would complain of being inconvenienced if they could.)  For ADS cars to really take off as a product, they would need to be one part of an overall integrated system.  The cars would need to talk with each other, which means some sort of digital protocol has to be settled on, radio spectrum would have to be allocated by the Fed.gov, infrastructure for communications will have to be built out, and more.

On September 6th, the House of Representatives passed the SELF DRIVE act.  As laws these days tend to be named, SELF DRIVE is an acronym: Safely Ensuring Lives Future Deployment and Research In Vehicle Evolution  The act sets up a framework that the industry thinks is necessary.


SELF DRIVE ... will allow companies to test up to 100,000 autonomous vehicles on regular roads, even if they don't meet current safety standards. What this legislation does is give companies researching and actively working on self-driving tech a chance to prove their technology is safe.


The need for these regulations is important so that all car manufacturers work against set standards. This way Tesla cannot make ADS vehicles that operate different from Ford, which could lead to accidents. In addition, in the absence of federal regulation, states have taken to creating their own laws for ADS vehicles. This could prevent self-driving cars from crossing state lines.

Personally, I think this is a stupid argument.  Why should industry need Washington to mandate that Tesla not make ADS vehicles that operate differently from Ford?  It's like agreeing on specifications for modems: it's in everyone's best interest to come up with a set of standards everyone can live with; after all, look how successful electronics industry standards like RS-232 or Ethernet or about a zillion others work.  In the world I used to work in, committees of representatives from all of the competitors would meet in "impartial NGOs" to iron out how aviation systems should work.  In the auto industry, I don't know how it came to be, but having the same basic controls - the same basic User Interface - in every car has to help everyone.  Now, could Tesla or Ford or someone else come up with a vehicle that meets all the industry group standard but has some other advantages to try to capture sales?  Why not?  What's wrong with a company trying for competitive advantage by offering something above and beyond the minimum requirements?  I don't see why they want the heavy, clumsy hand of government.

The second part of that paragraph says states might impose regulations such that ADS cars could be illegal in some states while legal in others.  That's (as I've heard it) how the Fed.gov got involved with the unspeakable evil of low-flow toilets.  States had started specifying them on their own and there was no agreement in required gallons per flush.  The toilet companies begged the Feds for "one rule to flush them all" so to speak.


The second part of the act allows car manufacturers to deploy 100,000 self-driving cars per year (25,000 for the first year the law would be enacted) that would be exempt from existing automobile safety standards. This is important for car manufacturers to design without needing certain safety features like a steering wheel or pedals, such as that for Google’s self-driving vehicles. The act is moving on to the Senate, where autonomous trucks might be added to the bill as well.

The US Department of Transportation issued some guidelines for ADS development and testing.  They eased requirements for safety equipment, so that these test cars are not legally required to have a steering wheel (I didn't know that was a law; I thought we needed one to make the car work).


At the gathering, Secretary Chao introduced the guidance document A Vision for Safety 2.0, released by the U.S. Department of Transportation and the National Highway Traffic Safety Administration (NHTSA). The guidance, according to Chao, “supports further development of this important new technology, which has the potential to change the way we travel and how we deliver goods and services.” According to the press release from NHTSA, the voluntary guidance will help car manufacturers with the following:
The guidance document outlines 12 safety elements that car manufacturers can follow to help design ADS vehicles. Some of the 12 safety elements highlighted by NHTSA are human-machine interfaces, crashworthiness, post-crash ADS behavior, data recording, and object/event detection and response. Click here for a PDF of the full guideline document. 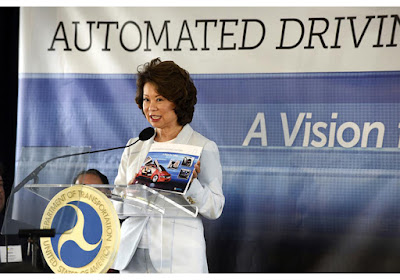 The "Vision 2.0" safety guidance scales back some of the regulations, reducing the previous guidelines under the Obama administration from a required 15-point safety assessment test prior to deployment to a voluntary 12-point assessment.

Machine Design looks at this with the view they entitled their article, "One Step Forward, One Step Back".  Why?  They like that SELF DRIVE passed and was sent to the Senate, so they see Federal involvement, but they don't like that the Fed.gov made the safety guidelines voluntary.  They don't like the "light regulatory touch".

As we've all commented here before, I'm surprised this hasn't turned into a Celebrity Ambulance Chaser Free For All, with lawyers lining up to represent the first next person killed by a self-driving car.  The lawyers are drawn to "deep pockets" like a shark to blood in the water.  There aren't many pockets deeper than the major automakers.