It's September 30th, or as we call it around here: August 61st.  The end of September with only one sign that it's not August: the sunset getting earlier every night while sunrise gets a little later every morning.  To be honest, it's not quite August.  Yeah, it has been in the 90s if it's not raining, but over 90 doesn't ordinarily last as long as the high temperatures in August.  Accuweather's long range forecast guesstimate doesn't really predict a overnight low under 70 until Halloween Weekend, but nobody should trust a forecast that far out.  They do show some highs in the low 80s in just two weeks, which is marginally more believable.

And we're ending the month much as it began, under what the Hurricane Center calls "Invest 99".  (For those who aren't familiar, an "Invest" is an area of investigation, the first stage in the sequence of development of a hurricane: Invest - Tropical Depression - Tropical Storm - Hurricane).  That only means a few more storms and a bit more wind than usual. 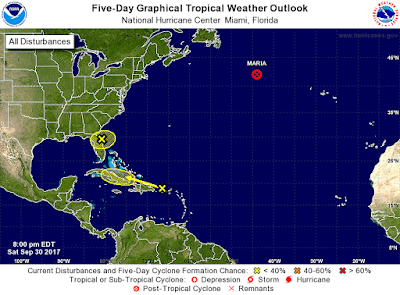 Just think; it's just under 8 weeks from last Thursday will be Thanksgiving.