Winnie the Pooh and the Poopy Day

Irma has done a few interesting things in the last 24 hours. If you're obsessively observing the radar updates, like about a few hundred thousand Floridians, you would have seen the storm stick on the northern coast of Cuba long past the expected right hand turn. After that turn the path has been farther to the east (right) of the predicted path.  You can read that as it taking a harder right hand turn and going closer to straight north rather than a sweeping turn with a more northwesterly path. 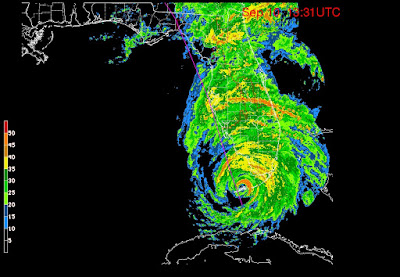 The faint red line is, of course, the predicted path and you can see the eye off to the east of it.  In the 11 AM advisory, the red line has been shifted east about 50 miles.  While everyone loves to play forecaster in these situations, it looks like it's going to whack Naples, Ft. Myers, and Port Charlotte, then travel up the coast into Tampa before briefly emerging into the Gulf near Crystal River.  Port Charlotte is where 2004's Charley came ashore with 150 mph winds.

Florida's west coast is going to get the whacking that the east coast was expecting to get just a few days ago.

As for us, it's just a blustery poopy day.  These things tend to come in squalls, and they're now making it well into tropical storm strength.  Still, unless the track goes farther east, we're "officially" not forecast to get hurricane force winds.

Since I'm a bit reluctant to do too much in the shop, should we lose power, I'll probably sit here and do updates if anything interesting goes on.