I'm told frogs say, "time's fun when you're having flies."

It has been a bit of a whirlwind couple of days since my last post, but the tree is in place, the shopping is essentially completed, we're completely ready for the holiday break, and even got the boat out this morning for a few hours of fishing (you will note I said "fishing", not "catching"; or as the French say, cherchez le poissons).  It was around 45 degrees or so when we put the boat in the water, but warmed up to about 65 by the time we came back in.  Winds were almost dead calm; the sky was cloudless and a fantastic shade of blue.

So while burning some fuel in the outboard, it gave me some time to think about the price of oil.  Naturally, regular gas at under $2.50/gallon, as I paid yesterday, makes it a lot easier to live with a boat than when it was around $4/gallon, but what is going on with oil?  Is this going to suddenly reverse?  Is it going lower than $50?  Brent Crude oil from Stockcharts.com: 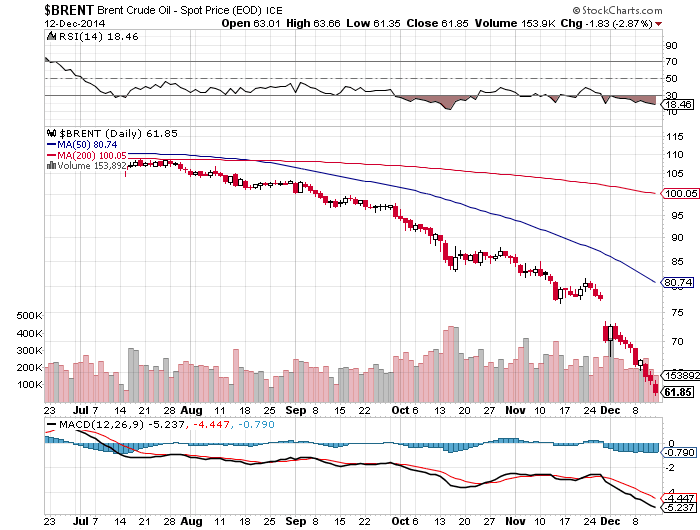 Since July, crude oil has been falling in price from just under $100/bbl down to a close of $61.85 on Friday.  For most of us, the falling oil prices are a Good Thing; we spend less on running our cars, and boats, along with the more important things like heating houses.  It should show up in reduced prices for things that get shipped across country (short version: everything).  The falling prices, though are having negative effects around the country - especially in the new US oil production fields.  Perhaps more importantly, it's pinching the other oil producing nations.  The BBC presented this graph of the break even oil price for a sample of countries.   The graph omits Russia, which is stated elsewhere to need $100/bbl to break even.

(I hasten to add there are a few quoted oil prices: Brent crude is one price, light sweet crude is another and so on.  I used the Brent crude price to make these two charts consistent with each other.  The exact price to the penny isn't as important as the trend).

While it's impossible for us to truly know what's going on, there has been reporting that Russia is driving this effort along with their proxies in the Mideast.   Others have said it's being led mainly by Saudi Arabia.  Either way, the theory goes that the goal is to get America out of the oil market, so that they can get prices back up.  This idea is supported by some of the things Russia is doing where they can to shut down energy production.  With oil at close to half of what Russia and Saudia Arabia need, that's quite the game of chicken.  "Let's you and me bleed ourselves to death, and I bet I'll stay in the game longer than you do".

I think there can be a bigger game going on here, though.  The principal power in OPEC is the Saudis.  The Saudis have no use for the Iranians and are frankly terrified of a nuclear Iran.  You can bet your butt that if Iran goes nuclear, the Saudis will go nuclear as well.  For a country that nominally hates Israel, they've quietly agreed to allow Israel to over fly Saudi territory if needed to attack Iran ("the enemy of my enemy is my friend" in action?).  They also want Assad out of Syria and Russia is propping up both Iran and Syria.  I think it's entirely possible that Saudi Arabia could be playing the game to get Putin out of the area, and try to collapse the governments of both Iran and Syria.  Russia's economy is already showing signs of trouble.  If they collapse Putin himself, get him ousted by ballot, by revolt or worse, I think the Kingdom would view that as a good thing.  I also can't imagine the Saudis would be too upset if they found a price for oil that shut down American shale oil production.

So I think the falling price of oil could well be the result of the Saudis pressing it down all by themselves. I can see Russia and Saudi Arabia working together to hurt us, but I think the Saudis have a stronger interest in collapsing the Iranian government and if it hurts Russia, well, that's just a bonus.

Posted by SiGraybeard at 7:17 PM