When I last updated this, I had upgraded my mill and was able to start taking chips off a steel rod with it.

With the mill in place I started looking into lathes.  Like the milling machines, most of the lower cost lathes you can buy new these days are made in a couple of factories in China, and Seig is again the big name.  Quick sidestep: lathes are usually described by two numbers, the first number is the swing or largest diameter object that can turn over the bed or ways of the lathe, and the second number the distance between the chuck and the tailstock (see below), or between tools called centers mounted in those places, which gives an indication of how long a piece of work that can be held.  A common example is a 7x 12 or 14", which turns an object 7" in diameter over the bed of the lathe and 12 or 14".  Exactly what constitutes a given size can be up to the company selling it.  For example, one seller might sell a 7x14 that another would sell as a 7x12 because it would never hold a piece of work 14" long; they refer to the bed length and not the length with the tailstock in place.  It's best to think of these numbers as rough indicators of the overall size and then compare dimensions between the different brands. 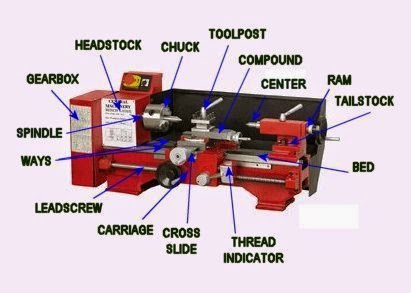 I had been leaning toward a large tool room lathe, a name typically in the range of a 12 to 13 by 36 to 40" lathe.  These can be rather large machines with large, heavy motors that produce more than two horsepower (a practical limit for a 115 V circuit).

After weeks of poring over specifications and really pondering what I'm likely to be doing, I decided to look into lathes in the 9x20 class, which fits my expected work envelope with some room for comfort.  I don't really anticipate working on things as large as turning brake drums, but cutting the chamber for a rifle barrel is a real possibility.  To do that, most writers recommend a lathe with a bore through the headstock of 1 1/2" or more.  (The barrel would stick out the left end of the headstock and the chamber area held in the chuck - a very stable position).

Also bear in mind the big truism/cliche', "How big a lathe do you need?  Invariably about 1" bigger than you have".

I eventually narrowed it down to a choice between a few and then a choice between two, the Little Machine Shop 8.5 x 20, a Seig SC4 and a Precision Matthews PM1127VF-LB . At first glance, they appear wildly different in size, and the PM1127 is certainly a bigger, more powerful, more capable machine.  The LMS 8.5x20 is virtually the same work envelope as what most dealers sell as a 9x20 but with a more powerful motor and power cross feed as well as feed along the axis of the part.

I set up an Excel comparison matching the accessories (dealers never spec out their machines with the same accessories) to find the final price to put it in my shop.  The PM1127 ends up costing 20% more at $3182 vs. $2638 total (including delivery).  In my case it came down to concluding the PM1127 is certainly more lathe but I'm not sure I'd ever take advantage of it.  I've decided to go with LMS 8.5x20.