On Friday night, I wrote about the EPA's regulatory dump on ozone, and how the administration loves to dump new laws and regulations the night holiday weekends begin because no one is paying attention; something that always struck me as a Banana Republic tactic.

Turns out I missed the real regulatory dump.

On Wednesday, the Obamanoids, fresh from taking over education with their Common Core agenda, released 3415 new education regulations, including things that can easily be interpreted as moves to outlaw home schooling.


But what many parents and educators are focusing on in the Obama administration’s regulatory roadmap — known as the federal Unified Agenda, with its 3,415 regulations that will be finalized in the months to come — are particularly concerned about are the new rules that push the Common Core. These include: 1) federal attempts to control teachers via new teacher training; 2) the use of federal “waivers” limiting state educational authority and; 3) the federal “phasing out” of state authority over special education.

New federal attempts to take over teacher training is just one regulation away from saying teachers must be certified by the Federal training, and that home schooling is illegal unless the teachers are Federally certified.   As Bill Clinton's aide Paul Begala put it, "Stroke of the pen, law of the land. Kinda cool!"  The Home School Legal Defense Association pointed out that parents across the nation with children in the public schools should be very cautious about the latest swarm of restrictions designed to carry out the United States Department of Education’s (USDE) regulatory agenda.


“Although there is nothing in this agenda to indicate that the proposed regulations would threaten homeschool freedom, they point to a disturbing trend of the federal government attempting to control our nation’s education system,” HSLDA Director of Federal Relations William A. Estrada, Esq. warns. “As we have seen with the battle over the Common Core, even though the Common Core only applies to public schools, it is a long-term threat to every student, including homeschool and private school students.”

My kids are long out of the school system, and my grandkid is not quite in it yet, so while the state of education and its socialist indoctrination bothers me, I don't actually have a dog in this fight.  From what I see of Common Core in my limited research, while it may be reasonable in limited areas, others are not.  It's cronyism of the highest order, full of handouts to companies like Microsoft and others who want to data mine our kids.  Even ignoring those problems, anyone should recognize that the home schooled kids are outscoring their publicly schooled counterparts the vast majority of the time.  It's almost a cliche' that when you see a bright, articulate kid on TV or somewhere it always turns out that they're home schooled.  Of course, that really frosts the public teachers' unions.

More to the point, education is not enumerated as a Federal power.  The Federal government has absolutely no authority to dictate teacher training requirements and they have no authority to regulate handicapped or special education.  Regarding the first:


“Teacher Preparation: On April 25, 2014, the President directed the Department to propose a plan to strengthen America’s teacher preparation programs for public comment and to publish a final rule within the next year,” the document states. “The Administration seeks to encourage and support States in developing systems that recognize excellence and provide all programs with information to help them improve, while holding them accountable for how well they prepare teachers to succeed in today’s classrooms and throughout their careers …”

and regarding the second:


“The Secretary will amend the regulations governing title I, part A of the Elementary and Secondary Education Act of 1965, as amended (ESEA), to phase out the authority of States to define modified academic achievement standards and develop alternate assessments based on those modified academic achievement standards in order to satisfy ESEA accountability requirements,” the document reads.

The states are under no obligation to swallow this.  This is a 10th amendment issue: the Federal Government is pushing in to take over things they have no constitutional authority over.  The only authority they have is what the states have given up to them.  Of course, they hammered Oklahoma for having the nerve to refuse Common Core and you can be sure they'll do the same in your home state.  We need to help our state governments stand up to the tyranny from DC. 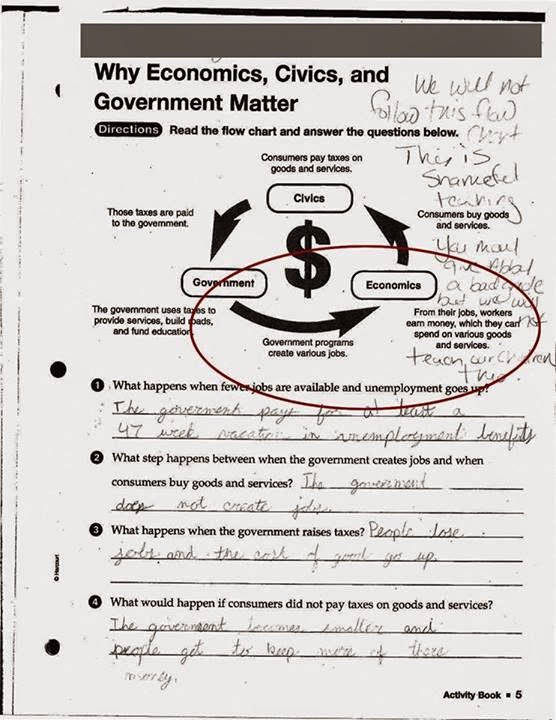 (Common Core civics lesson from New Hampshire.  Note how it says government creates jobs, with no mention of private businesses or entrepreneur start-ups.)