I find that I have an attitude that seems odd compared to many folks I run across.  It's rather common to hear people talk about wishing they were young again.  I wouldn't want to go back to college age, or farther (shudder).  I don't even particularly want to go back to the best years of young adulthood, when we were established and even starting to get ahead.  I'm pretty OK where I am.  If I had H.G. Wells Time Machine, though, I'd push that lever forward, not backward.

But there are disadvantages to being an old guy, one of which is the possibility of not being around to see this come to fruition. 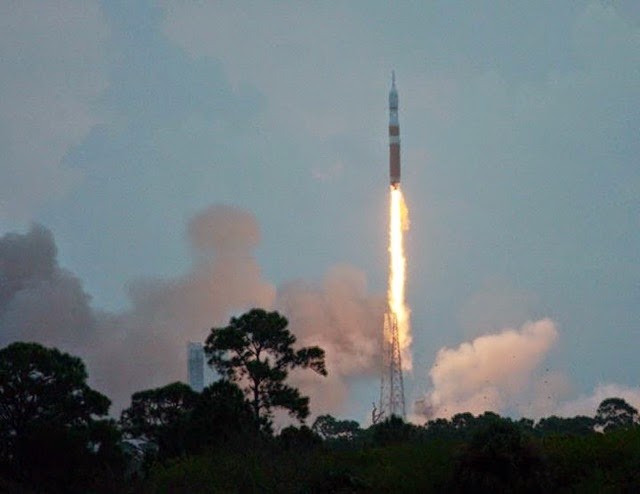 A friend of a friend took time off from work to witness today's test flight of the new Orion capsule.  As a bonus, the capsule was mounted on a Delta IV Heavy, the most powerful rocket in the US these days, and those are always cool to watch.  The launch time of 7:05 was right around the time I leave for work, but I was planning on going in a little later and watching it. As the count resumed at 7:01, we heard rain starting to hit the roof.  While it was clear at the KSC, it was raining here and we didn't try going out to look.

Orion is the first component to fly in the Space Launch System, the SLS, that ultimately is planned to take a crew to Mars.  There's a sequence of launch vehicles being planned; the smaller one of which has more liftoff thrust and payload than a Saturn V. 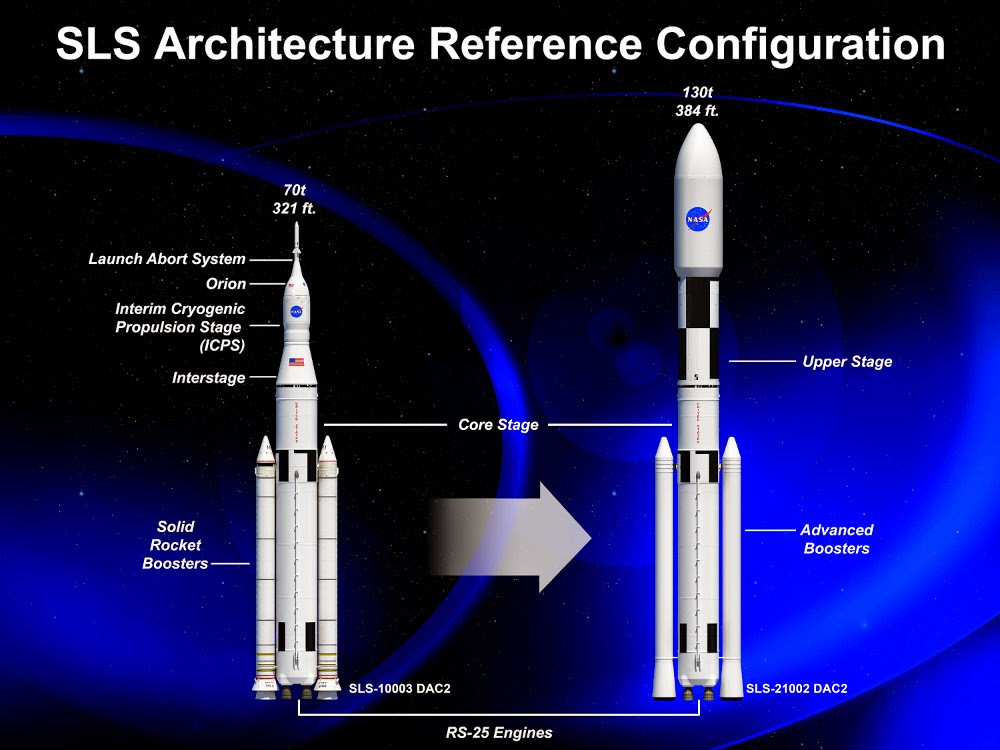 The smaller vehicle will be used for missions closer to Earth than a few million miles.  Not just moon missions, but LaGrange point missions.  The larger vehicle is intended for Mars trips.  The smaller vehicle is well into conceptual design and modeling.  It uses upgraded shuttle Solid Rocket Boosters, and the liquid fueled main engines from the shuttle for its core.

When?  Well, the advertised times have the 70 Metric Ton launch vehicle flying by 2021 and the 130 Metric Ton vehicle by the 2030s.  Needless to say, those are subject to slipping out, especially as the US financial situations worsens (as it seems it eventually must).  Of course, if there's a total collapse, all of this is moot.

I've written before about my sense of loss at seeing the US lose manned access to space.  The country that put men on the moon now has to buy access from the Russians, who are flying a ship first designed at the dawn of the space age.  In one of his videos, Bill Whittle points out the frightening fact that no one born after 1935 has ever walked on the moon.  Not before 1935, after.  They are all old men, and are leaving us.  In a few years, I expect dear granddaughter to ask me something like, "Grandpa, is it true men went to the moon when you were a boy?"  And that will break my heart.

I've also written about the bigger picture of whether or not NASA should be doing space flight at all:


Should NASA be involved in this sort of program?  Frankly, I don't know.  I believe a project like the International Space Station isn't something NASA should be doing: it's too routine, too commercial.  The truth of the ISS appears to be NASA needed a mission for its shuttle, and the ISS is a natural fit.  NASA should be leading edge; developing new technologies, like hypersonic transports, cheaper ways to orbit, Warp engines and things with long payback periods, things that companies probably would not invest in.  NASA is now institutionally risk-averse.  They've gone from "The Right Stuff" to arthritic bureaucracy, but that's natural for a government organization that's hung out to dry when something goes wrong (see Hubble Space Telescope, Challenger, Columbia...).  There may not be a commercial reason to go to Mars, so NASA should do that.  There are certainly commercial and scientific reasons to go to the moon and set up a permanent base for many things: science research (the far side of the moon is an ideal place for giant telescopes, radio and optical) and mining (Helium 3 can be mined on the moon and may be the next great fuel). This seems like a place for an industry/NASA team to figure out how to do such things.

Of course, we never get to know the future.  Anyone of us could die tonight.  If the SLS and Orion proceed as planned, I'll be in my 80s when we get to Mars.  Maybe well into my 80s.  Sure would like to see it, though.