In the comments to yesterday's post on the coming troubles, most people went down the good cop/bad cop rabbit hole.  Yeah, I'm the one who brought up the subject, but that wasn't my emphasis.  Liberty's Torch put up a good post on the Cop Conundrum today, covering some of the biggest questions.  My point was in the last major paragraph (where conclusions are usually found):


So I ask you: how is this indoctrination of ISIS children different than the indoctrination by Al Sharpton, Saul Alinsky, Frank Marshall Davis, and the others who trained generations of black Americans to believe the police want them dead?

In the case of the race-baiters like Sharpton; the communists like Alinsky, and Davis; or the community dis-organizers/destroyers like Obama, Holder, and even as high in the White House as Valerie Jarret herself, we see behavior deliberately aimed at isolating a group as "others" with all the potential for horrific acts that comes with assigning "otherness" (which seems to be a historical precursor to genocides).  To these people, the others are the police, but when the argument is that police are racist it adds another element to the story.  Sharpton's charge assumes all police are white, or at least that they hate blacks.  It's nothing less than trying to start a hot race war in this country.

I know there are those, including Francis Porretto at Liberty's Torch, who look at the patterns of black on white crime in the country and say the race war has actually started.   (Francis, I don't mean to put words in your mouth; it's just how I read you.)  I know many have warned about being perhaps a bit more aware while out in public.  There's no way you can stay more than 50 feet from everyone while you're out Christmas shopping or in the crowd watching tonight's possum drop, so since you can't have that element of time, you need to get as much advanced warning as you can.  Crank up that situational awareness level.

But, again, that's not the only thing to be aware of and watching.  Just as the US left is depicting all of us as "others", so is ISIS in the way they're indoctrinating their followers.  There is a possibility that ISIS, who is already in the US, could mount some sort of attack here.  Buck Sexton, National Security Editor from the Blaze and sitting in as anchor on Glenn Beck's program, presented a list of the top 10 threats to the US in 2015, as developed by the Council of Foreign Relations.  Not that I particularly trust the CFR, but their list is:
Inspire, the English language e-zine from Al Qaeda has been advocating more lone wolf attacks, including on airliners.  Lone wolf attacks, like the hatchet attack on NY city police officers a few weeks ago, the attack on the Canadian parliament, or the Sydney Lindt Chocolate shop, now seem to be what they're calling for.  Presumably, this means that they've found they're unable to plan larger operations and can only mount smaller ones.

There's a balance between situational awareness, which can appear to be paranoia, and having too much paranoia, but I think we're entering a particularly dangerous time in recent history.  Our enemies realize the we're under weak leadership and that this is a good time to do whatever they want.  Add in the fact that those idiot voters didn't give Obama a congressional majority but elected the Stupid party, and there's additional displeasure at home, too.  I'll conclude with something Michael Bane posted, in that entry I referred you to yesterday:


I think many of Obama's most ardent followers thought for sure that by Year 6 we'd be in the Workers' Paradise, with Obamaphones and caviar for everyone...except those of us working to pay for it all, of course. Our role would be to "check our privilege," shut up and keep paying taxes.

And now those most ardent followers, especially the media, for who the phrase useful idiots seems to be tailor-made, are really really pissed off. No Obamaphones! No social justice! The narrative is failing! For the media sycophants, the race hustlers, the hate America Faux revolutionaries, that dacha by the sea is fading away as we speak.
...
In his 1938 text The Anatomy of Revolution (you've read it, right?) Crane Brinton noted that the revolutionary "moment" occurs not at at the lowest ebb of a culture, but rather when rising expectations are thwarted. Progressives rode the rising expectation of "fundamental change" right up until they ran smack into the American exceptionalism. Despite what one might read from the pampered elites at Brandeis University -- "Amerikka needs an intifada...enough is enough" -- the proletariat are not rising up in support of the progressive agenda. Quite the opposite.

With professional "protesters" fueled by a sense of rage over lost opportunities and missing Obamaphones, enabled by a 24-hour news cycle controlled by our blood enemies and given tacit approval by our supposed leaders, we potentially face a level of violence not seen since the 1960s. And that's not even counting the increased threat from those other fascists for the Middle East! 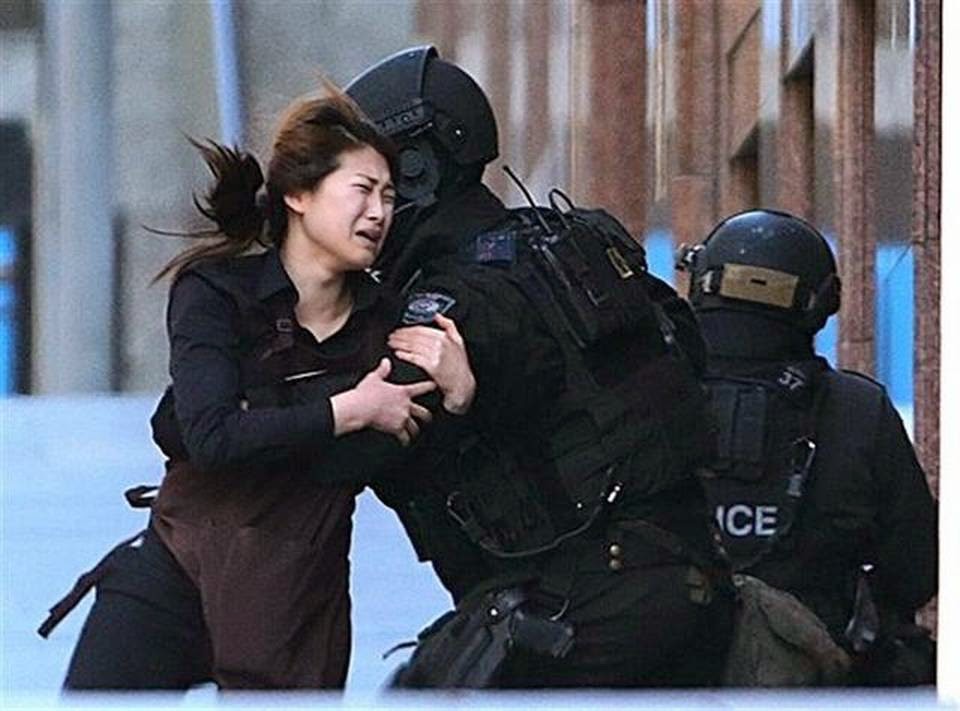 One of the hostages who escaped from the Lindt Cafe - I've never seen her identified.

Labels: commies and other idiots, Events, peace of islam, politics