Russia In Full Tilt Economic Collapse? Not Quite

They may not be in full economic collapse just yet, but you have to look closely to tell the difference.  In the last six months, the Ruble has lost almost 50% of its purchasing power compared to our dollar.  The fall in the Ruble has led to Russians going on a spending spree, getting rid of Rubles and buying hard goods; basically anything they think they might need soon or anything that might be a store of value.


On his way home from work tonight, with the near-collapse of Russia’s currency on his mind, Maxim Legonkikh made something of an impulse buy.

He pulled into the Porsche dealership and bought himself a brand new sports car. In cash.

“It’s an incredible deal,” he explained. “I’m only here because I need to find a safe place for my money.”

In response, the Bank of Russia (their equivalent of our Federal Reserve Bank) has raised interest rates to 17% in an attempt to halt the collapse, but that doesn't seem to be stopping the slide in the Ruble, which fell to a 16 year low.  On Tuesday, Apple confirmed they stopped sales into Russia; presumably out of concern they'd never get proper payment.

Russia has been through currency collapse before, with the most recent being 1998, and market watchers are saying this crisis is reminiscent of that collapse.  Consequently, many Russians alive today remember the previous crashes and know what to do.  It's one reason people are going on buying sprees; if the currency is collapsing, money you're holding buys less every day.  You may as well buy as much food and other survival needs as soon as you can.  Anything you think you might need is going to cost more next week, so get it while you can.  Something we read about in Weimar Germany is that people would take their pay in cash and spend it as soon as they could, in order to get the most out of their pay that they could.

The next big warning sign would either be a run on the banks, or a bank "holiday" (closure).  While I've heard rumors of runs on the banks in Russia, so far they appear to be just rumors or they're just not widespread enough to make news.


Banks in Moscow, including Citigroup Inc. (C), ZAO Raiffeisen and Khanty-Mansiysk Otkritie Bank, yesterday reported a surge in demand for foreign currency as the ruble continued to slide after a plunge in oil prices. The currency has lost almost half its value against the dollar this year, a decline yesterday’s interest-rate increase initially failed to halt.

The higher interest rates might help allay fears of the currency devaluing farther, and Russian banks are trying to calm the situation by paying higher interest.


“The financial system and banks in particular are clearly in danger as a crisis of trust seems to be developing as well,” Smolyaninov wrote. “We believe the worst is yet to come.” [Note: Slava Smolyaninov is deputy head of research for Moscow brokerage UralSib Capital - SiG]

The root of the problem in Russia is the oil price situation I wrote about last Sunday.  The problem is that Russia is so big that this will have effects well outside the country.  Liam Halligan in the Telegraph (UK) fills in details on how a volatile Russia would be a bad thing for all of the European Union.  It's worth a read for the perspective.


The eurozone can’t recover if Germany isn’t strong. The UK, in turn, can’t stage a proper recovery with the single currency area, its major trading partner, on the skids. Last week’s rouble collapse, and the detrimental impact it will have on business sentiment and investment, even if the turmoil ends now, means Russia will contract by 3-4pc next year. That pleases hawkish commentators, given their hope that a deep recession might result in the ousting of President Putin. But it’s bad news for the jobs and livelihoods of ordinary households across the whole of Western Europe.

Halligan points out the Russia's economy is really stronger than it appears right now; certainly light years ahead of the US economy in at least one regard:


There’s a big current account surplus and government debts are among the lowest in the world. With liabilities in roubles and many revenues in dollars, the fiscal balance actually improves when the currency falls. A mere $2.1bn of sovereign borrowing is repayable next year – which is minuscule.

If he's right, Russia might have a rough Christmas or a rough few months, but they're fundamentally sound.  In contrast the US is having smooth months that I frankly don't understand when you consider our $18+ trillion dollar debt and $116 Trillion in unfunded liabilities (I like to call that "promises made"). 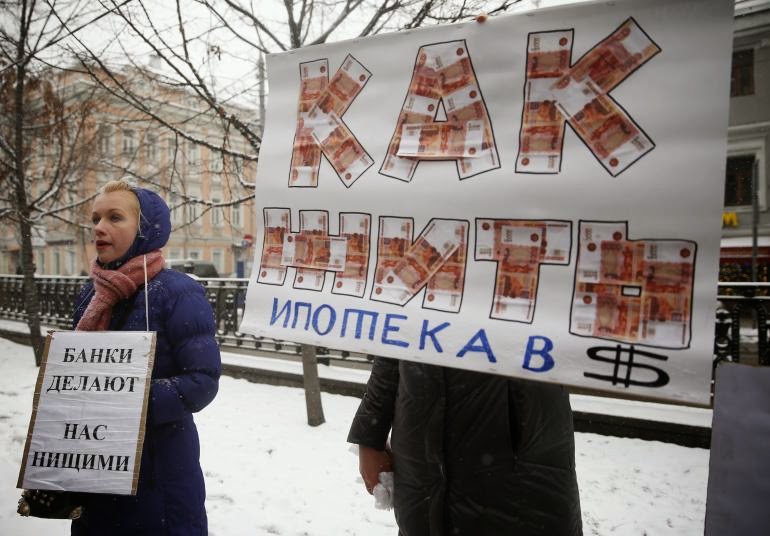 Russian protesters on 12/12 (source).   The article translates the signs as "Banks make us beggars", and "How to live. Mortgages in dollars".   The first one, at least, is exactly wrong - and you hear similar thoughts here in the USA.  The banks, and especially the central banks, would have zero power to mess with the currency and make people beggars if the governments didn't allow it.  It's the governments that are making us beggars, not the banks.  If governments didn't hand control of the nations' economies to central bankers they could do nothing of the sort.  Of course, then the politicians couldn't run up trillion dollar annual deficits, multi-trillion dollar debts and do all the vote buying they do.