Radio Sunday #3 - The Birth of the Modern Receiver

Now we're back where we started, before the look at earlier architectures for receivers. The most common receiver design is the superheterodyne, developed by Edwin Armstrong in 1918 – during World War I – and just after the Tuned RF design. Undoubtedly both men were working on the same problems and Armstrong found a way to overcome many of the problems of the TRF design along with other competing ideas. The superheterodyne principle of operation is followed in virtually every modern radio; whether or not that design is implemented in hardware or software.

So what does superheterodyne mean? It is essentially a buzzword; an advertising line. The best explanation I've read is that super was a big advertising word, hetero came from the word for “different” referring to different frequencies and dyne from power. Heterodyne has come to mean to combine two signals by multiplication, which produces the sum and difference of the two signals. This process is widely used, but it's usually called mixing, so that the components that do this on purpose are called mixers. Multiplication? Like light, if you put two radio signals through a medium like the air, or (for radio) a wire, they stay as their separate frequencies and don't affect each other. Only if you combine them in a circuit that affects their amplitudes nonlinearly will you get the sum and difference frequencies.

Let me present a block diagram of a superheterodyne (superhet) receiver that looks more conventional to hams and others who have studied some electronics than the one I posted in the Receiver Hunting story.

The big X in the mixer is to signify that it's multiplying two signals times each other; due to a property of math, when we multiply two sine waves, we get the sum and difference of the two frequencies.  Real mixer circuits put out four frequencies: the RF, LO, and the sum and difference frequencies.  From a circuit performance standpoint, the best mixers are called double balanced mixers; others exist but thousands or millions of double balanced mixers are sold every year.  The balance refers to electrical currents being balanced in the mixer to help with various performance measures I'll get to later.

This approach is universally used for frequency converters like this.  Some years later, I designed a two meter transverter for my ham radio station (transverters work for transmitting and receiving).  This took low level transmitter signals and mixed it with a crystal, taking the sum, not the difference.  For the oscillator, I used a 116.000 MHz crystal.  When I set to transmit at 28.000 MHz, the transverter output 144.000.  On the receive side, the system went the other way; it took in 144.000 MHz, subtracted off 116.000 and put 28.000 into the radio.

There's problem lurking here.  All superheterodyne receivers will receive the undesired mixing product just as strong as the desired.  It's called the Image frequency.  In the case of my shortwave converter, I wanted to receive LO + IF.  My receiver would put out just as strong a response at LO – IF.   That would be at 8.000 or 13.000 MHz depending one which crystal I turned on.  That's why the block diagram has that RF filter at the input – to reduce the strength of anything on the image frequency.

(This image is based on the common IF of 455 kHz, mentioned below)

Mixers can be made in many different ways; Armstrong used vacuum tubes, and as transistors and FETs appeared, those were adopted into service.  The following picture shows what's called a Double Balanced Mixer: a four diode bridge with the Local Oscillator applied on the left, the Radio Frequency applied on the right and the Intermediate Frequency taken out of the tap at the lower right.  These also work “the other way”.  If you apply a low frequency to the IF, perhaps your modulated audio for a transmitter, the RF port becomes an output, not an input. 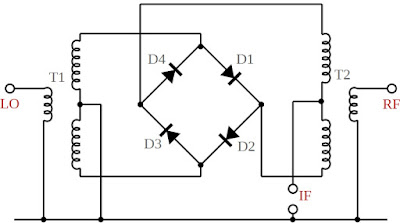 So why do we do this?  Why do we build an oscillator into the radio, and add the mixer stage?  The architecture buys you some important things
This architecture is universal.  It can mix a low frequency signal up to a higher IF or mix a higher signal down to a lower IF (appropriately called upconversion or downconversion).  Cheap AM radios (remember them?) settled on an IF just below the bottom of the AM broadcast band, 455 kHz, long ago.  Multiband radios with shortwave coverage sometimes upconvert to another IF, usually because there's a filter they want to use first, then downconvert to 455 kHz, in an architecture called dual conversion.  Microwave receivers downconvert, sometimes a dual conversion, to get to a frequency where the signals are processed.

The block diagram above is single conversion.  High performance receivers in the vacuum tube era went to double and sometimes triple conversion (I haven't personally seen quad conversion, but they might be out there).  Double conversion is still very common.  A very common technique today is to convert the entire receive spectrum, from 0.5 to 30 MHz up to around 70 MHz, filter and amplify, then downconvert to a lower frequency, sometimes in the low kHz.  For example, an Icom 7600, their last superheterodyne HF radio, upconverts to a “roofing filter” (no signal wider than that gets into the rest of the receiver) at 64.455 MHz then downconverts that to 36 kHz where the signal is digitized and all the signal processing is done digitally.

There's an application of the superheterodyne principle that has become widely adopted among hams and is now a frequently used architecture in commercial wireless systems.  Hams call it direct conversion, and the novelty of this architecture is that the IF is 0 Hertz – DC.  The architecture could be the same as previously shown, but in most ham uses, the mixer is the detector.

In modern radios, the audio filter will usually amplify was well, so it's not a big change.

So how does this work?  A common example might help: consider you want to make an amateur receiver with minimal power drain, and small enough to fit in a tiny package for backpacking or camping.  You want 40meters (7.0 to 7.35 MHz).  The local oscillator tunes that range (usually called a VFO for Variable Frequency Oscillator).  We know the mixer will give us the sum and difference frequencies, and we want to tune in someone transmitting Morse Code (CW) on 7.025 MHz.  If we tune to exactly 7.025, the receiver would hear nothing.  At this point, you could be using a multi-thousand dollar receiver.  Most of those  receivers offset the display from where you're tuned so that when the display reads 7.025 the LO is really offset from that, and the tone you hear in the speaker is from that offset.  They have a separate product detector, which is a mixer and Beat Frequency Oscillator, BFO.

Instead, we tune the VFO slightly off the exact frequency by tuning it to make a Morse code tone we like.  We've made our demodulator into a product detector and our LO is their BFO.  The problem is that you also hear the image frequency if someone is transmitting on it - the signal that's the same offset as the desired on the other side of the LO.  If your LO is at 7.024, you'll hear someone on 7.023; if your LO is at 7.026, you'll hear someone at 7.027.

In effect, you double the number of potential interfering signals.  This is called the Single Signal problem with direct conversion.  There are ways to reduce it, but it's always there.

The main drawback of the superheterodyne architecture is the complexity of having more parts in more circuits, so cost and complexity.  As a rule, whenever we introduce new circuit blocks and complexity, we have a tendency to fix some problems and introduce others.  In the vacuum tube era, receivers used crystal oscillators and VFOs as their LOs to change bands.  Starting primarily in the 1970s, with digital integrated circuits, those began to be replaced by frequency synthesizers (Phase-locked loops or PLLs).  When those were introduced, problems the existing circuits didn't have started to show up, and radios took a giant leap backwards until that was understood.  Similarly, when transistors replaced vacuum tubes, problems with strong signal handling surfaced that the high standing voltages or currents of vacuum tubes masked, and it took years to understand that, too.

A less obvious problem is that mixers, being the only deliberately nonlinear component in the radio, can introduce problems with hearing signals that aren't really there.  The image is not considered one of these.  The details are probably more of interest to designers than people just trying to learn about how receivers work but makers of mixers sometimes provide charts of all the undesired products their mixers will receive.  Double balanced mixers are better in this regard (better suppression of undesired) than single balanced, or unbalanced mixers, but the "spur table" has to be designed for.   Here's where I get to wave my hands and say, "that's beyond the scope of this article".